Continue to Variety SKIP AD
You will be redirected back to your article in seconds
Sep 26, 2017 5:24pm PT 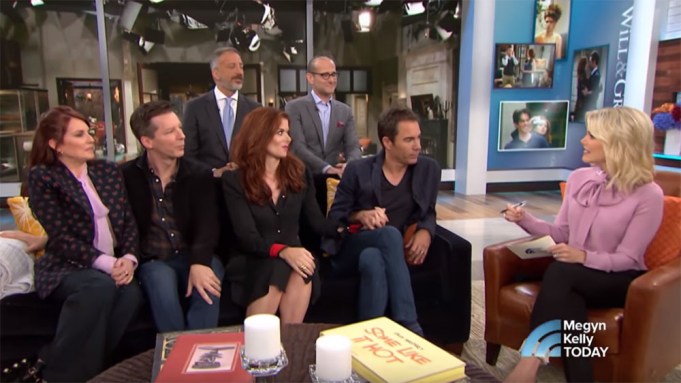 “Will & Grace” star Debra Messing wishes she could take back her recent visit to “Megyn Kelly Today.”

The actress appeared with the rest of the “Will & Grace” cast on the Monday premiere of Kelly’s new daytime show to promote the reboot of the NBC comedy. However, Kelly drew backlash for asking a “Will & Grace” superfan during the segment, “Is it true that you became a lawyer, and you became gay, because of Will?”

The fan answered, “I look at Will Truman and I’m like, he has it made: lawyer, apartment in New York City and gay? Come on.”

After surprising the fan with a free trip to Los Angeles including tickets to a live taping of “Will & Grace” and a behind-the-scenes tour, Kelly told him, “I don’t know about the lawyer thing, but the ‘Will & Grace’ thing and the gay thing is going to work out.” Earlier in the episode, the former Fox News host interviewed the “Will & Grace” cast and creators about the show’s positive impact on the gay community.

A day later, Messing responded to Kelly’s comment in an Instagram post. User @ivor_pine commented: “But why did you guys do the Megyn Kelly show? That’s a fail!!” The actress replied: “honestly I didn’t know it was MK until that morning. The itinerary just said Today Show appearance. Regret going on. Dismayed by her comments.”

Watch the clip of Messing’s appear here or above.