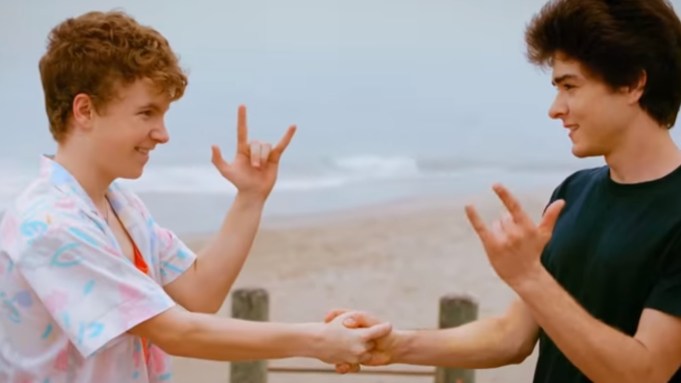 Lifetime announced the premiere date and released the first trailer for the original movie “A Tale of Two Coreys” on Thursday.

The movie is based on the true story of the rise and fall of 80s’ iconic actors Corey Feldman and Corey Haim, with Feldman serving as an executive producer. It will debut on Jan. 6 at 8 p.m. ET/PT on Lifetime. Watch the trailer above.

Feldman (Elijah Marcano and Scott Bosely) and Haim (Justin Ellings and Casey Leach) skyrocketed to fame after working together on the blockbuster movie “The Lost Boys” and quickly became young Hollywood heartthrobs. They collaborated on popular comedies including “License to Drive” and “Dream a Little Dream” and basked in being Hollywood royalty in their early teens.

But as their stars rose, their lives began to quickly spin out of control with endless partying and drugs. As their fame and fortune increased, dark secrets haunted them. Young and impressionable, the actors suffered through years of sexual abuse at the hands of industry insiders. With studio offers drying up and their reputations becoming tabloid fodder, Feldman eventually turned his life around by getting sober, getting married and having a son. Tragically, Haim’s attempt at a Hollywood comeback ended abruptly when he died suddenly in 2010.

Feldman has been back in the news lately due to the recent rash of sexual harassment and assault allegations that have rocked Hollywood. He has repeatedly stated that both he and Haim were victims of sexual abuse in their youth, and recently launched a campaign last month to finance a documentary that would expose the alleged pedophiles in Hollywood.