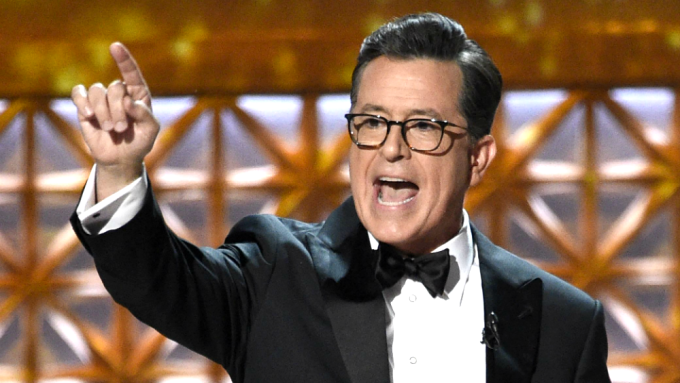 Stephen Colbert began the “Late Show” on Wednesday by praising Donald Trump’s response to recent natural disasters in Mexico City and Puerto Rico, before calling out the president for weighing in on Emmy ratings.

“That was a strong and presidential response,” Colbert said in regards to Trump’s recent tweets. “That lasted for about 18 minutes — because then he tweeted about something that truly seemed to upset him.”

Colbert then recited Trump’s tweet from Tuesday, which reads: “I was saddened to see how bad the ratings were on the Emmys last night — the worst ever. Smartest people of them all are the ‘DEPLORABLES.'”

I was saddened to see how bad the ratings were on the Emmys last night – the worst ever. Smartest people of them all are the "DEPLORABLES."

“Now wait a second; that can’t be right. I swear I heard somebody say at the Emmys that they were the highest rated ever. I find this hard to believe,” Colbert said, referencing former press secretary Sean Spicer’s surprise appearance.

“This is not something to be sad about,” he said. “I’m not even sad about it, and I was the host of the Emmys. But I do want to point out that every single part of that tweet was factually inaccurate. The Emmys weren’t last night from when he tweeted it. They were Sunday night. I checked the TV schedule and he must have been watching ‘NCIS: New Orleans.'”

According to Nielsen ratings, 11.4 million people watched this year’s Emmys, a slight increase from last year’s 11.3 million viewers. “That’s right! We had the second-worst ratings of all time. In your face!” Colbert pointed out before initiating a chant of, “We suck less!”