Chris Wallace to Reince Priebus: ‘You Don’t Get to Tell Us What to Do’ 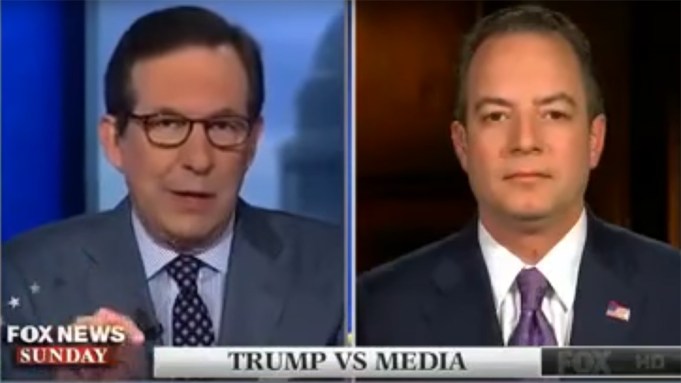 President Donald Trump may have left Fox News off his list of media outlets that he called “the enemy of the American people,” but the network’s Chris Wallace certainly did not take kindly to POTUS’ controversial tweet.

The “Fox News Sunday” host made that clear during an interview with Trump’s chief of staff Reince Priebus, in which Priebus tried to defend Trump’s Friday tweet that said, “The FAKE NEWS media (failing @nytimes, @NBCNews, @ABC, @CBS, @CNN) is not my enemy, it is the enemy of the American People!”

Wallace asked Priebus if the president believes that a “free and independent press is a threat to the country.” “I understand where he’s coming from. There are certain things that are happening in the news that just aren’t honest,” Priebus replied. “And we’re not talking about everyone, Chris. We’re not talking about all news, but we’re talking about something that I guess he’s termed as fake news.”

Obama did indeed decline to appear on Fox News for years until April, when he granted an interview to Wallace to talk about the 2016 election. As Priebus indicated his shock over the fact that Wallace appeared to “forget all the shots” Obama took at Fox News, Wallace responded, “But he never went as far as President Trump has and that’s what’s concerning because it seems like he crosses a line when he talks about that we’re an enemy of the people.”

Wallace isn’t the only one speaking out against Trump’s shot at the media. On Saturday, John McCain told Chuck Todd on “Meet the Press” that suppressing the press is “how dictators get started.” “We need a free press,” he said. “We must have it. It’s vital.”