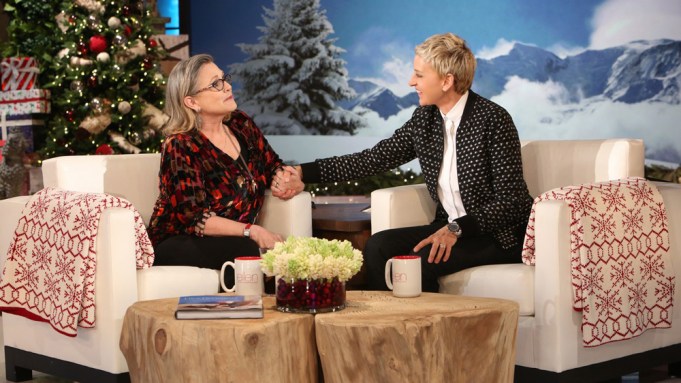 Carrie Fisher had a lot of fun on “The Ellen Show” over the years, including giving away “Star Wars” tickets and joking about her mom Debbie Reynolds moving in next door to her.

In a touching tribute to her friend Fisher, Ellen DeGeneres delivered a short speech on her show on Wednesday, before playing clips of some of her favorite moments from Fisher’s appearances.

“I wanna say something about my friend Carrie Fisher,” DeGeneres said. “I knew her for a long time. She’s been on the show many times, and the last time was just a month ago, and I loved when she was here. She made me laugh so hard, she was smart, she was funny, she was hilariously honest about herself and the world around her.”

The montage that followed showed the pair discussing whether Fisher had truly embraced the character of Princess Leia, to which she replied, “Embracing it? No it follows me around like a vague, exotic smell.”

Later Fisher and DeGeneres don Princess Leia buns and give away “Star Wars” tickets to passing fans, and then discuss Fisher living next door to her mother Debbie Reynolds, who died only one day after Fisher’s death, at the age of 84.

In another clip, Fisher is asked by an audience member what advice she would give to her 30-year-old self. Fisher wittily replies, “Don’t do anything you’re thinking of doing. Just don’t do it. And don’t talk about it either, don’t tell people everything.”