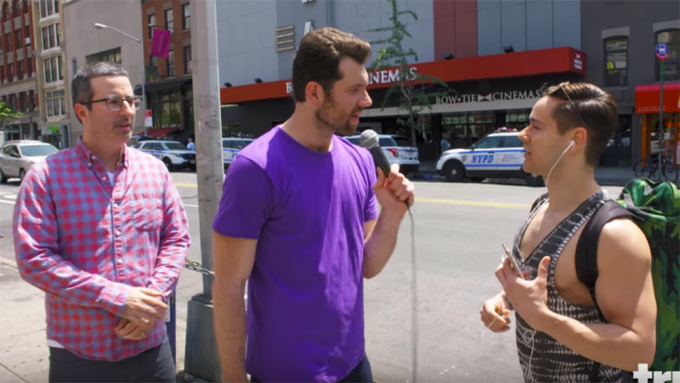 The British comedian and host of “Last Week Tonight” joined up with Billy Eichner for a segment of “Billy on the Street” to find out what gay people think of him. Eichner scours the streets of New York for gay people to sample, while Oliver stands awkwardly by his side. At first the pair’s struggle seems to be to find someone who’s even heard of him.

However, when Eichner then asks each gay person their opinion of fellow TV host Wendy Williams, the answers are far more positive. At one point, Eichner asks one man on his phone what he thinks of Oliver, to which he replies, “I don’t even know who that is,” before answering the same question, but with a Wendy Williams spin with, “of course I do.”

Oliver tries his best to sell his show in a couple of awkward little pleas, but all of them seem to be more interested in Wendy Williams and Taraji P. Henson’s character Cookie Lyon from “Empire.”

However, towards the end of the segment, one man throws Oliver a bone, saying, “He talks about all the people that are involved in non-traditional relationships, so he does a good job of helping everyone start to think about it a little bit better.”