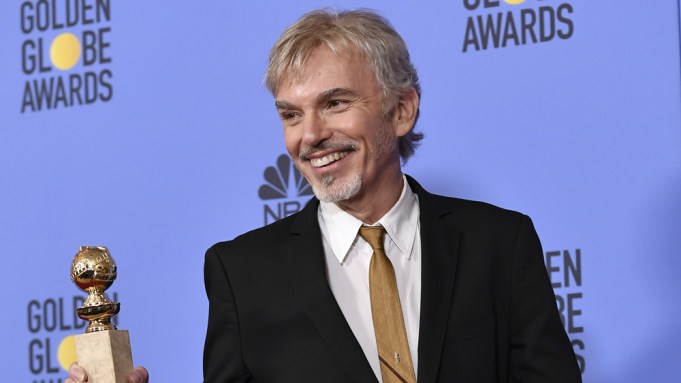 Billy Bob Thornton won the Golden Globe for best actor in a drama television series for his role in Amazon’s “Goliath.”

Thornton beat out Rami Malek of USA’s “Mr. Robot,” Bob Odenkirk of AMC’s “Better Call Saul,” Matthew Rhys of FX’s “The Americans” and Liev Schreiber of Showtime’s “Ray Donovan,” who were all nominated in the best TV drama actor category.

Thornton dedicated his win to a production assistant, Luke Scott, on the show who had passed away.

Backstage, when Thornton was the first winner to speak to members of the press, who spoke more at length about the production assistant.

“Luke made me want to come to work. He was the guy who when I got there, I knew that his face, it was such a joyous face and he was so happy just to be there and have that job and be around the business. To lose your life at 23 years old, when you’re just starting that job,” Thornton said, “At the end of the day, the two entities I have to think are Luke Scott and Amazon.”

Thornton was also asked about the future of “Goliath,” which has not yet been renewed for Season 2. He joked, “If I told you, I’d have to kill you,” but then he elaborated, revealing that Amazon does want to do another season — but he does not definitely know about a renewal. “They would like to do another season — I know that much,” he said. Elaborating on the first season, he continued, “This one was written in a way that it had a beginning, middle and an end…but I honestly believe there is more potential for the show than what was in the first season. I think we need to know more about where this guy came from.”

Variety had predicted that Rhys would walk away with the award tonight because of the buzz this year for “The Americans,” which has been ignored in previous award show seasons. Our expert also predicted that Thornton was a close second, given his pedigree at the Globes in the past, plus the Hollywood Foreign Press Association’s tendency to gravitate toward new shows — in this case “Goliath.”

Last year, Jon Hamm won the award for the last season of AMC’s “Mad Men.” Given the sentimental value of the final run, Hamm was a shoo-in, giving his fellow nominees little chance to win. Malek, Odenkirk and Schreiber were all up against Hamm in 2016.

This year’s category was comprised of three returning nominees (Malek, Odenkirk and Schreiber) and two category first-timers (Rhys and Thornton), though Thornton did win a Golden Globe in 2015 for FX’s “Fargo,” which fell into the category of Best Performance by an Actor in a Miniseries or Motion Picture Made for Television. For Schreiber, the nomination marked his fourth consecutive in the category for “Ray Donovan.”