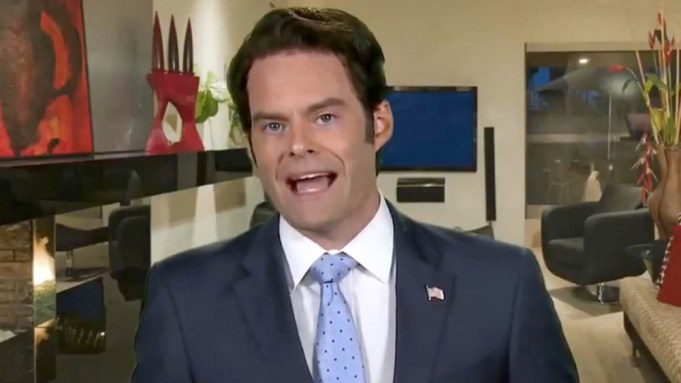 From Stefon to … Anthony Scaramucci?

The “SNL” alum abruptly FaceTimed hosts Michael Che and Colin Jost, saying “I heard you two nutless liberal a– wipes mention my name earlier and when I hear my name three times, I appear like a Goombah Beetlejuice.”

“Everybody loves the Mooch,” Hader continued. “I’m like human cocaine. You got a little bump of me, I made you feel excited, but I was out of your system too quick. And now that I’m gone, you’re all depressed and edgy, and you’re trying to figure out how to score some more Scaramooch!”

“The Mooch” was fired just 11 days after joining the White House — prompting press secretary Sean Spicer and chief of staff Reince Priebus’ exits — following a profanity-laced interview in The New Yorker in which he targeted Trump’s chief strategist Steve Bannon and Priebus.

In the July 27 interview with Ryan Lizza, Scaramucci had said, “I’m not Steve Bannon, I’m not trying to suck my own c–k.” Hader referenced the rant during his “Weekend Update” appearance, clarifying that he “didn’t say Bannon tried to ‘S’ his own ‘C.’ He did it! He made contact! I saw it!”

Scaramucci himself will appear on “The Late Show With Stephen Colbert” on Monday.