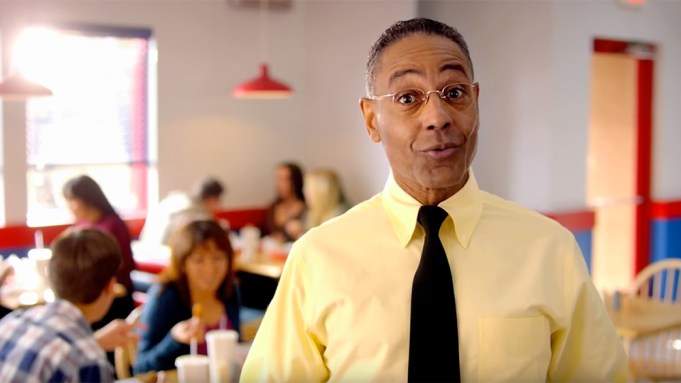 On its face, the video above is just an ad for a chain restaurant. Los Pollos Hermanos promises the spiciest chicken and curly fries you’ll love — or owner Gus Fring will give you your money back.

Wait, Gus Fring? The drug lord from “Breaking Bad”? Yes, it appears the 30-second spot is a stealth promo for the upcoming season of AMC’s “Better Call Saul,” and the appearance of Giancarlo Esposito’s ice-cold kingpin at the end is the clearest indication yet that the arc of Bob Odenkirk’s Jimmy McGill may just collide with Gustavo Fring’s in the new batch of episodes.

Season 2 finished with Jimmy coming clean to his brother Chuck (Michael J. McKean) about messing with his case files, but also hinted at Fring’s entrance into the “Saul” world, with a menacing note left for Mike Ehrmantraut warning against retaliation toward Fring’s partner Hector Salamanca.

“Better Call Saul” Season 3 will hit screens sometime in the next couple months, though AMC hasn’t revealed an exact airdate. While the “Breaking Bad” spinoff saw the same ratings erosion as other AMC and cable series last year, it was still the sixth-highest-rated drama on ad-supported cable.

You can watch the Los Pollos Hermanos spot above or on YouTube.