Parody of Viral BBC Dad Interview Becomes Its Own Hit, Especially Among Moms 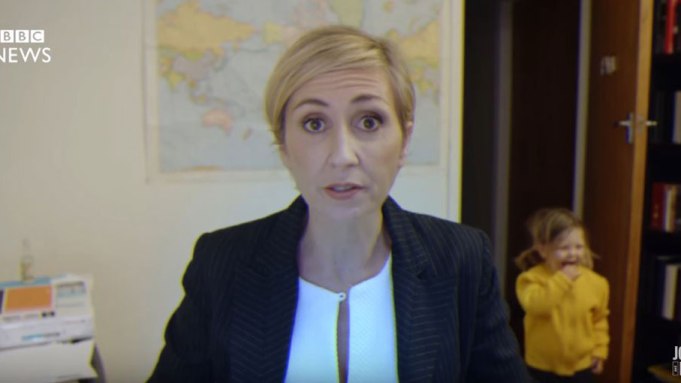 Courtesy of Jono and Ben

A parody of the BBC interview where a father gets interrupted mid-interview by his children has become a hit of its own — especially among working mothers.

Last week, Professor Robert Kelly and his family became internet sensations after Kelly’s two kids burst into the office where he was conducting a Skype interview on South Korean politics. His children were quickly removed by his wife, Kim Jung-A.

New Zealand-based comedians Jono and Ben released a parody of the viral video Thursday, this time featuring a mom instead of dad. They recreated the video, right down to the little girl’s yellow sweater.

But instead of shooing her kids out of the room, she embraces them, feeds them, plays with them, makes dinner, and even cleans the toilet. We won’t ruin the end for you, so just watch it here or above.

The parody video has gotten over 18 million streams on Facebook and 700,000 views on YouTube. Many mothers have shared it, with comments like “This is great! It shows working moms go through and how they really handle it all.” Others have criticized the parody as being sexist against men.

BBC News disagreed, leaving a comment on Jono and Ben’s Facebook page that read,”She’s welcome on air any time.”

Kelly and his family have become so famous that he had to turn off their phones and stop receiving Twitter alerts for a few days.

“We thought it was a disaster. I communicated with the BBC immediately afterwards and I apologized to them,” Kelly explained during a press conference. “And I had assumed this would end any television appearances … and no one would ever call me again.”

How wrong he was.