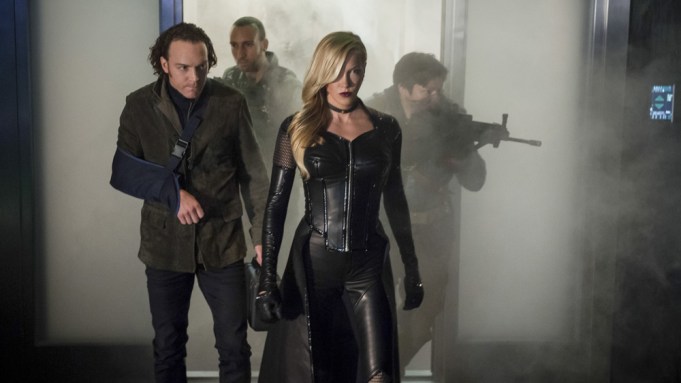 Star City will be as dangerous as ever in “Arrow” Season 6.

In an exclusive look at the season premiere, Black Siren (Katie Cassidy) takes the fight directly to the SCPD. The clip shows a thug named Alex being broken out of a police interrogation room when Black Siren and a group of men blow a hole in the wall. The gang then clears the department of cops before Alex sets up a bomb in the center of the building.

“We’re all set here. Care to do the honors?” Alex asks as he offers the detonator to Black Siren. She exits the room and hits the button with a smile on here face — seemingly destroying a large portion of the SCPD building.

After taking last season off — aside from a few guest spots — Cassidy is back as a series regular for the new season. Her character Laurel Lance was killed by Damien Darhk in the show’s fourth season. Her new character, Black Siren, is a version of Laurel from Earth-2, who first appeared in the second season of “The Flash.”

“You come in like a wrecking ball,” Cassidy said during the “Arrow” panel at Comic-Con this year. “The dynamic between Black Siren and Team Arrow — it’s a parallel that’s different from Laurel.”