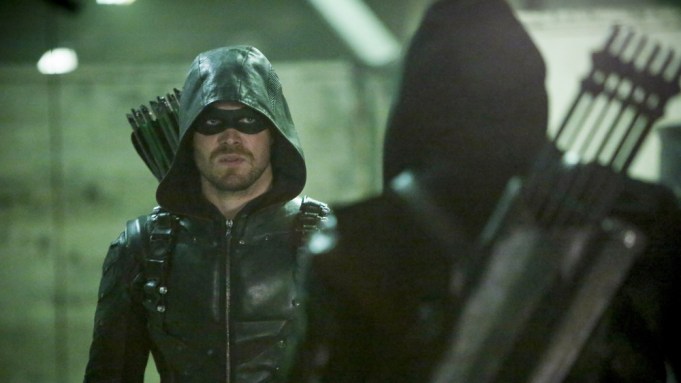 At the close of Season 5 of “Arrow,” there was a huge explosion on the island that left the status of Team Arrow in question. When the gang hit the Comic-Con stage two months later on Saturday, fans got to see an early sneak peek at what our heroes will be up to in the new season.

Mericle opened the panel by talking about the explosion, “The explosion felt like the right way to wrap up Oliver’s story.” Guggenheim added, “Season 5 would end as the end to the last ten years of Oliver’s life. We’re not rebooting the show, we’ll double down on things that resonated with people in Season 5. We will see a different kind of Oliver Queen. We’ll tell some different kinds of stories with Oliver.”

Now that Oliver has a son of his own, will it change him? Amell admitted, “Oliver’s not a very good dad. I was really nervous about my first scenes with Jack [Moore], who plays William. I’m loving my scenes with him. To do fun, new stuff as Oliver has been a real joy. But he’s a s–t dad.”

While they didn’t reveal who makes it off the island explosion, the previously axed Cassidy will be back and says, “It feels like I never left.” Amell said, “You come in like a wrecking ball.” Cassidy added, “The dynamic between Black Siren and Team Arrow — it’s a parallel that’s different from Laurel.”

Tonally, there will be a shift in the new season. Family was a big theme in Season 5, but the dynamic changes. Amell said “The momentum of Season 5 carries into Season 6. My jaw hasn’t dropped while reading a script in awhile, but the first three scripts I read are tight and action-packed. We take our time and I think we’ve earned that.”

On the villain front, post-Prometheus, Guggenheim teased, “Season 5 was about building up Team Arrow 2.0. In thinking about Season 6, we wanted to double down on families and found families. We’ll have a few familiar faces. One of the other members of a villainous cabal will be played by Michael Emerson and we could not be more excited.”

Asked about a possible crossover with “Supernatural,” Amell claimed, “I’d do it in a heartbeat. It’d have to be with me as Oliver as a waiter, waiting on Jensen [Ackles] and Jared [Padelecki].”

In a very sweet moment toward the end of the audience Q&A, Amell melted the crowd’s hearts when a little girl named Sarah, who is a cancer survivor, dressed as Arrow, asked Amell a question. He gave her his Arrow necklace and told her that at next year’s Comic-Con, she can give it back to him.

Season 6 of “Arrow” kicks off October 12th on The CW. The new trailer can be viewed above.