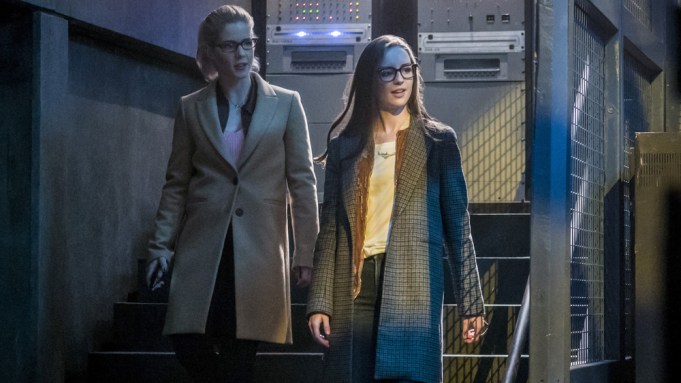 In this week’s episode of “Arrow” — titled “Checkmate” — the team scrambles to track down Susan Williams (Carly Pope) after she was taken by the recently unmasked Prometheus.

Amidst all that, Felicity (Emily Bett Rickards) has finally decided to join the worldwide hacker group Helix after spending weeks using their tech to secretly dig up dirt on various criminals that Team Arrow was looking to track down. In the clip, Felicity is given a tour of Helix’s base of operations by Alena (Kacey Rohl).

“I just thought that a secret hacker organization would be a little bit more intimate,” Felicity says after seeing the size of the operation.

“Well, Helix is a worldwide operation,” Alena responds. “Kinda like the U.N. if it actually accomplished things.”

Felicity is drawn to multiple screens with images quickly flashing across them. Alena tells her it’s a real-time feed of every cell phone camera in the world running through a pattern recognition algorithm.

“That’s a lot of power for someone to have who’s not government,” Felicity says.

“The fact that we’re not government is the whole point,” Alena responds. “Power to the people, right?”