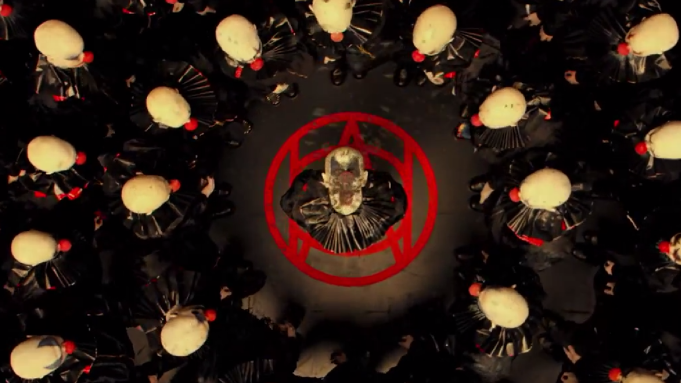 And the title of “American Horror Story” Season 7 is … “Cult.”

The news was announced during an “AHS” event at Comic-Con on Thursday, after co-creator Ryan Murphy previously revealed that the next installment of FX’s horror anthology is inspired by the 2016 presidential election. Along with the news, FX also dropped a new website and video, featuring a group of creepy clowns revealing the title. The video is marked as “Week One,” with the following seven weeks locked. You can watch the full teaser above.

The new season also got a premiere date: Sept. 5.

The announcement was made with a special presentation in the marina behind the San Diego Convention center. A floating barge sprayed a massive wall of water into the air, with the teaser being projected onto the water. You can watch video of the presentation below.

Per usual, still little is known about Season 7. What we do know, however, is that “AHS” veterans Evan Peters and Sarah Paulson are returning, joined by franchise newcomers Billie Lourd (who worked with Murphy on “Scream Queens”) and “Billy on the Street’s” Billy Eichner. Lena Dunham is also joining the new season, it was announced on Wednesday.

Despite the lack of information so far, “AHS” fans still know more about Season 7 than they did at this point ahead of the previous season, “Roanoke.” Murphy and FX kept that installment’s theme and title under wraps all the way up until its season premiere, whetting appetites with a series of mysterious teasers.

FX previously renewed “AHS” through Season 9. Its previous seasons have tackled different narratives, but have kept certain cast members like Peters and Paulson, and intertwined some plot points through the series.