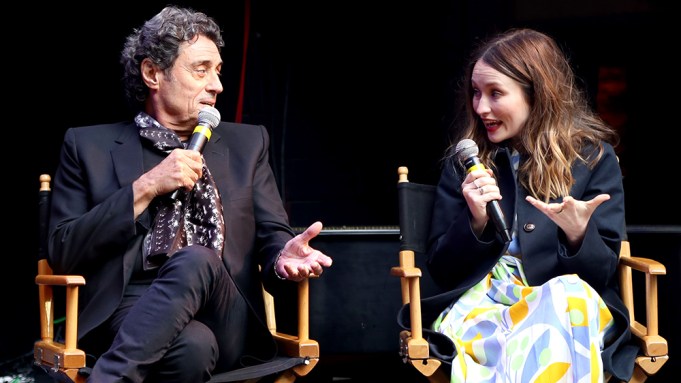 Almost exactly one year ago, it was announced that Emily Browning will be playing Laura Moon in Starz’s “American Gods.” On Sunday, at a SXSW panel, the cast and creators dropped another big piece of news: Browning will actually be playing two characters.

Show creators Bryan Fuller and Michael Green joined cast members Browning, Ricky Whittle, and Ian McShane at the Lionsgate Lounge for a panel moderated by Variety‘s Elizabeth Wagmeister to talk about the adaptation of Neil Gaiman’s acclaimed fantasy novel. There, they revealed that, in addition to Laura Moon, Browning will also play Essie Tregowan.

“Emily also plays Essie Tregowan, and those who have read the book, Essie was one of Michael and I’s favorite stories in the book. It’s essentially the tale of how Mad Sweeney made it to America,” said Fuller. “And we were talking about casting that role, and as we were in that conversation, Michael said, ‘Oh, we should just cast Emily in this role.’ And then we went to talk to Emily, and it was like, ‘So, the Essie episode’ — she was like, ‘Have you cast that actor yet? Because I think I should play her.’ And we were like, ‘Well, that just worked out well.’ ”

Browning admitted that she had a feeling Fuller and Green would ask her to also take on the second role, but she was hesitant, as she was tired and mostly wanted to “go take a nap, for like, three weeks.” “But, at the same time, the way that the character’s written, it’s so perfect and amazing, and I just knew — I’m like, if they ask me, I’m not — there’s no way I’m going to say no,” she added.

Somewhat indignant, she went on, “But I’ve been trying to keep it secret!”

McShane said that he “never thought there was any question that she was going to do it, when I read it early on.” He also teased a “big, important clue” about his own character, Mr. Wednesday… before the rest of his panel participants stopped him from revealing any more.

“American Gods” will debut on Starz on April 30. Watch the clip where the crew talks about Browning’s casting above.