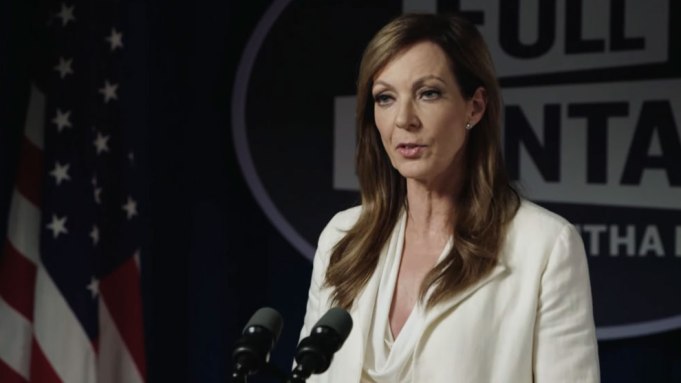 Samantha Bee may have been front and center of her “Not the White House Correspondents’ Dinner” on Saturday, but it was actually Allison Janney who started the ceremonies. The actress reprised her role as C.J. Cregg from “The West Wing” in a cold open where she vented her frustrations about having to deal with so many lazy journalists at a faux press briefing.

Despite delivering clever rebuttals to each increasingly asinine question — “Sam is not at all biased against white men, she just can’t tell [them] apart and thinks [they] all know each other” — Janney’s “C.J.” broke into a serious, Sorkinian monologue to condemn those in the media responsible for pushing “fake news.”

“Yes, we have freedom of speech and of the press in this country, and that is a beautiful thing,” she began. “[But] you pretend to be [real journalists], ruining their reputation, at least among people too stupid to tell the difference. You are the drags of a free society, we have to let you exist, but we do not have to listen to you.”

Janney’s intro was very similar to a bit that played out later in the night featuring Will Ferrell. The comedian brought back his George W. Bush impression as the event’s surprise guest, mocking both the 43rd and 45th presidents at once.