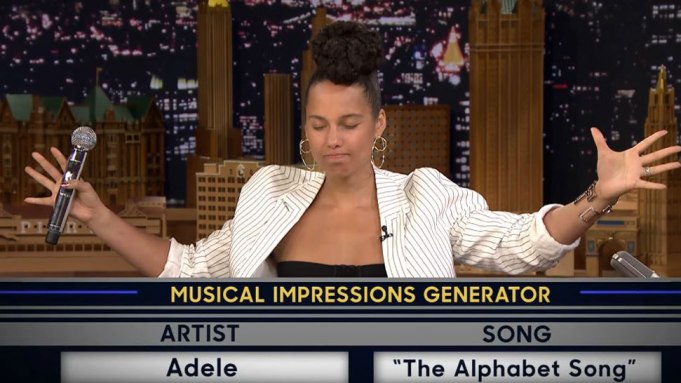 It’s difficult to mirror one of the most powerful voices in the music industry, but leave it to Alicia Keys to successfully fulfill the task.

On Tuesday night’s episode of “The Tonight Show,” host Jimmy Fallon invited Keys to participate in one of his popular games, “Wheel of Musical Impressions,” where she gave a masterful impersonation of Adele. The game pairs an artist with a well-known song, and asks the guest to do their best impression of the artist using that song.

After hitting the button to spin the wheel of impressions, a nervous Keys first landed on artist (and her costar on “The Voice”) Gwen Stefani, paired with “Miss Mary Mack.” To the tune of Stefani’s “Just a Girl,” Keys began the segment with a spot-on impression. With the band’s help, she quickly turned Stefani’s “Hollaback Girl” into “Miss Mary Mack Girl.”

After Fallon took on the task of impersonating the Pointer Sisters with a rendition of the “State Farm” jingle, Keys really shimmered with her impersonation of Adele, with which she was asked to sing “The Alphabet Song.” To the tune of “Hello,” Keys began her rendition by closing her eyes and opening her arms wide, much like the British singer does during her live performances.

Fallon’s response to the performance? “I smell a duet.”