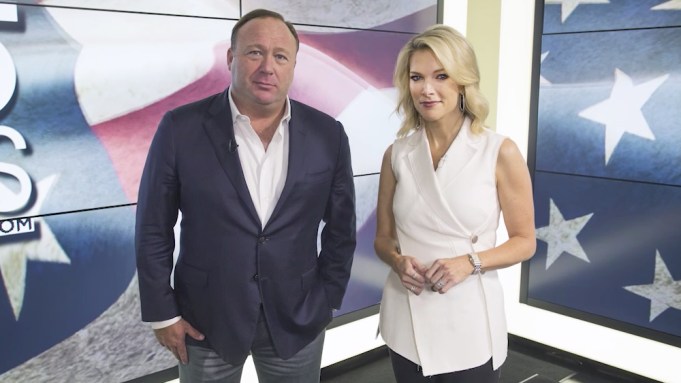 In a video posted on Twitter Thursday night, Jones released a portion of the interview and said that he would release its entirety later tonight.

“Coming out tonight, later this evening,” Jones said in the video posted Thursday. “I’ve never done this in 22 years. I’ve never recorded another journalist. I’ve never done this. But I knew it was a fraud, I knew it was a lie. God, she was like, ‘I want to get steaks with you, I’m obsessed with you. Oh my god,’ wailing around in her seat. It was all crap, and I knew it was all a lie. I said Sandy Hook happened, everything. She wouldn’t put it in the promo pieces, and so, we’re going to release, oh yeah, we’re going to the pre-interview and then when they put their fraud out on Sunday, which I’ve asked them not to air because they’re misrepresenting who I am and saying I’m as bad as Saddam Hussein or Jeffrey Dahmer or Charles Manson — I mean it’s crazy. We’ve got the whole interviews here — when she was here from 9:30 in the morning to 11 at night, we got it all. So you’re going to hear what I actually said.”

Jones did just that, releasing the full interview, along with audio from what he says is a phone call with Kelly, on Friday morning.

“All I can do is give you my word,” Kelly appears to say in the audio to Jones, which was recorded before she conducted the NBC interview.

“My goal is for your listeners and the left, who will be watching some on NBC, to say, ‘Wow that was really interesting,'” the audio continues. “And then the next time I want to get somebody, they’re going to say, ‘Look what you did to Alex Jones.’ It’s not going to be some ‘gotcha’ hit piece, I promise you that.”

“It really will be about who is that guy,” she can be heard saying later. “I’ll ask you about some of the controversy and I’ll ask you and you can respond. … If there’s one thing about me, I do what I say I am gonna do. I don’t double-cross.”

Kelly, whose new Sunday night news magazine premiered two weeks ago on NBC, has come under fire for interviewing Jones — a far-right provocateur and peddler of conspiracy theories, who has falsely questioned whether the 2012 Sandy Hook Elementary School shooting actually happened. JPMorgan Chase & Co. said Monday that it would pull all ads and digital spots from Kelly’s show until after the interview airs. On Tuesday morning, Kelly was dropped as the host of the gala for Sandy Hook Promise — an anti-gun-violence charity founded by parents of Sandy Hook victims.

Jones has also complained publicly about the forthcoming broadcast, claiming that Kelly is misrepresenting his take on Sandy Hook.

Kelly has defended her decision to proceed with the interview in the face of mounting public criticism. In a statement released Tuesday on Twitter, Kelly cited President Donald Trump’s past praise for Jones when justifying her decision to conduct the interview. “President Trump, by praising and citing him, appearing on his show, and giving him White House press credentials, has helped elevate Jones, to the alarm of many,” Kelly wrote. “Our goal in sitting down with him was to shine a light — as journalists are supposed to do — on this influential figure, and yes — to discuss the considerable falsehoods he has promoted with near impunity.”

Twenty-six people — 20 of them children — were murdered in the 2012 Sandy Hook Elementary School shooting in Newtown, Conn.

There are potential legal issues Jones would face in releasing the recording of the conversations with Kelly.

First and foremost is whether Jones signed a release form — standard contracts for most TV interview subjects — and what restrictions were contained in it, says Jeremiah Reynolds of Kinsella Weitzman Iser Kump & Aldisert. Another issue is when the release was signed, and whether it occurred before, during or after the interview.

“The copyright would not be hers. It is the person who holds the recorder who owns the copyright, technically,” Reynolds said.

Another issue is consent. Jones’ show is based in Texas, where the consent of only one party to a conversation is required. That means that he would probably be on solid legal footing if he recorded their conversation without her knowing about it.

— Ted Johnson contributed to this report.