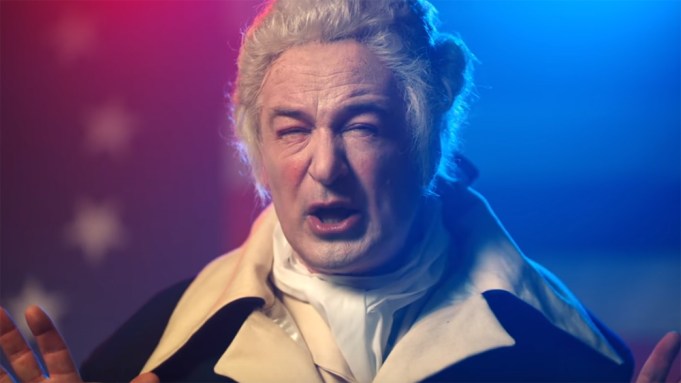 “Saturday Night Live” may be off-the-air in between seasons, but Alec Baldwin is still getting mileage out of his President Trump impression — but this time, in a powdered wig.

Baldwin dressed up as the first President George Washington for the Fourth of July, but with a little twist. He mixed it in with his famous “SNL” Trump impression.

“Hello everyone, it’s me, George Washington,” he said. “The guy who made America great the first time.”

As President Washington-Trump, he continued to list off all his accomplishments as POTUS. “I come to you this Independence Day with a special message: First, you’re welcome. You know, for your amazing freedoms,” Baldwin added. “I grabbed so much freedom from those British losers.”

He even threw shade at Trump’s controversy with Russia. “The press is saying the French interfered. Okay, that’s fake news. I don’t know French. I never borrowed money from the French.”

Promoting his new special, “One Night Only: Alec Baldwin” on Spike, he even poked a jab at himself. “Others like that idiot, Alec, play dress up and make believe their entire lives.”

“Some are featured on the one dollar bill and others are honored for one night only,” Baldwin said.

“One Night Only: Alec Baldwin” will air July 9 at 9 p.m. CT on Spike. The clip of Baldwin imitating President Washington-Trump can be watched here or above.