Continue to Variety SKIP AD
You will be redirected back to your article in seconds
May 5, 2017 10:54am PT 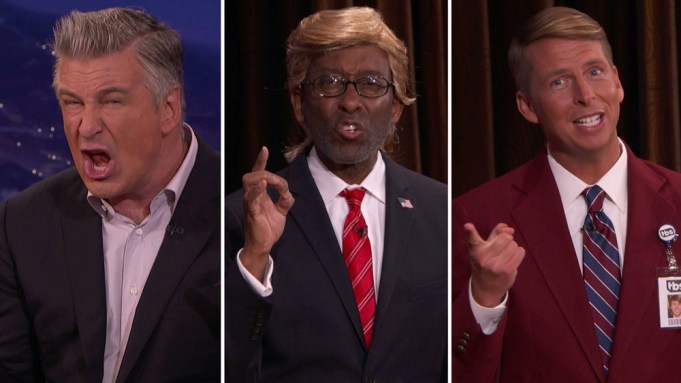 According to Alec Baldwin, people constantly approach him on the streets of New York, thanking him for his terrific Donald Trump impersonation on “Saturday Night Live.” So Conan O’Brien put the actor’s now-famous impression to the test.

On Thursday evening’s broadcast of “Conan,” Baldwin went head-to-head against several of the late-night show’s staffers, prompting what they called a “Trump-off.”

“Some people feel compelled to do their Trump impersonation for me,” Baldwin said to O’Brien of his public encounters. “It’s almost like I’m the number one gun fighter in town and they’re taking me on.”

His first three opponents — O’Brien’s production associate, graphic designer, and stage hand — entered the stage clad in Trump-inspired wigs, blazers, and long red ties. Yet despite their mastery of the president’s exaggerated hand gestures, their vocal impressions were no match for Baldwin’s.

O’Brien introduced his next competitor as a “former NBC page” who now works for the show, which led to an impromptu “30 Rock” reunion, as Jack McBrayer entered the battle scene (in character as “Kenneth” Ellen Parcell). Although he gave no attempt whatsoever at an impression, O’Brien still crowned him the winner.