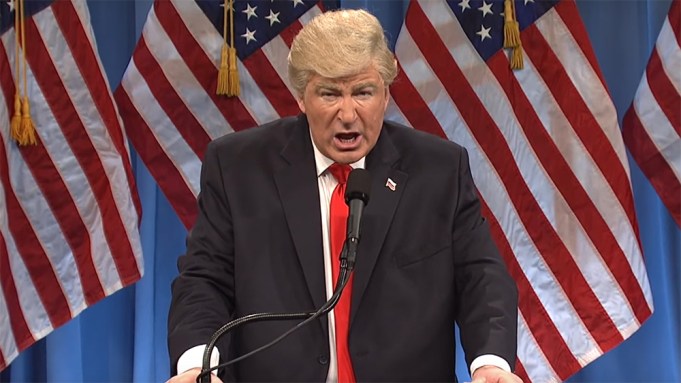 Donald Trump gave his first press conference as president-elect on Wednesday, so naturally, it was a golden opportunity for Alec Baldwin to step back into his wig for another appearance on “Saturday Night Live” this weekend.

Baldwin as Trump stood before “reporters” in “SNL’s” take on the press conference, and started off by bringing everyone up to speed.

“Let me answer the question that’s on everyone’s mind,” he said. “Yes, this is really happening. I’m becoming president. On Jan. 20, I, Donald J. Trump, will become the 45th president of the United States. Then two months later Mike Pence will become the 46th.”

Speaking of Jan. 20, he addressed the talent (or lack thereof) lined up for the big day. “Hold on to your tits and bits, because we have got Three Doors Down, Jackie What’s-her-face from ‘America’s Got Talent,’ and the one Rockette with the least money in her savings.”

Of course, Baldwin had to field questions about the unverified Russian dossier that was released this week, and staunchly denied the report’s claim about “golden showers.” “It didn’t happen and it wasn’t as cool as it sounds,” he told the press.

He tried to steer away from “pee pee party” jokes to the “thick stream of jobs” he said he’ll bring into the country. “This country will literally be showered with jobs,” he added.