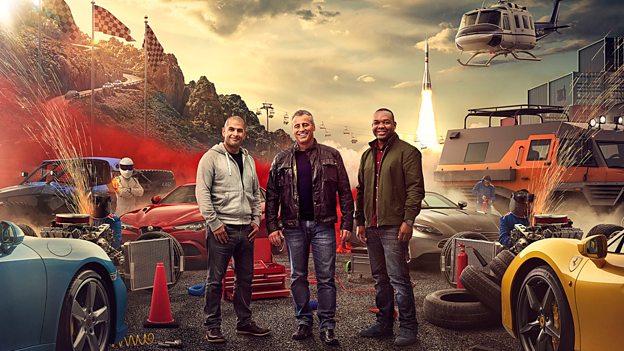 Courtesy of the BBC

BBC car-show “Top Gear,” which airs in more than 200 territories and celebrates its 40th anniversary this year, is shifting gear yet again, with the latest season hosted by Matt LeBlanc, Rory Reid and Chris Harris, the latter two having been elevated from supporting roles following the departure of Chris Evans.

“We’ve got big, ambitious films,” series editor Alex Renton tells Variety, reeling off a list of locations where season 24 was shot, including Kazakhstan, Montenegro, Monte Carlo, Cuba and Dubai. “We’ve had more time to prep than we did last [season],” he adds. “It’s big – the ambition is there.”

Last season, the new hosts were only booked in February – following the departure of former frontmen Jeremy Clarkson, Richard Hammond and James May – and the revamped program was on air in May. “That’s terribly tight to turn a show around,” executive producer Clare Pizey says. Since then the team has had time to get to know each other and bond. “You can’t force chemistry,” she says.

Pizey adds that they deliberately did the arduous Kazakhstan trip first. “That is throwing us all in at the deep end… so you immediately have a history then because you’ve been through something extraordinary together,” she says.

Evans’ departure has allowed Reid and Harris to team up with LeBlanc on these trips, whereas previously they were restricted to fronting films on their own. “We were like the lone soldiers who’d go out and do a power test on a car,” Reid says. “This season it is much more of a team effort, so the three of us will go and do big adventure films, and you get to hear different voices on the same subject, whereas last year it was my opinion or Chris’ opinion and that was it.”

He adds: “It’s funnier as well because you have someone else to bounce off. If I say something funny, [Harris and LeBlanc] can immediately chime in and say something else that adds to the story.”

LeBlanc says: “Chris and Rory are more in the focal aspect of the show – in the nucleus. Socially, we spent a lot of time together last year…We spent more time off-camera getting to know each other. So there is a chemistry between the three of us that persists.”

Some of the races and stunts are quite hair-raising to watch. Do the hosts feel genuine fear at times? “I wouldn’t say fear,” Harris says. “Some trepidation certainly.” He cites a trip through the California desert for an off-road event. “I thought: I am a long way out of my comfort zone. But what is good is that these guys [the producers] know how far to push us… We have to be taken to uncomfortable places to make great television.

“That’s the core friction of the show: It is producers putting you into situations where you react in a way that makes entertaining television… The nature of ‘Top Gear’ is hyperbolic – you have to go and do special things.”

He adds: “I trust them to not totally endanger my life. Just a little bit.”

Adventure is a vital part of the show’s appeal, LeBlanc says. “With some of these films you get to explore the world in the comfort of your own home, vicariously, and see these far-flung places. [The audience] experiences these cars through our eyes, and go on an adventure for an hour. It’s exciting. I’d watch it.”