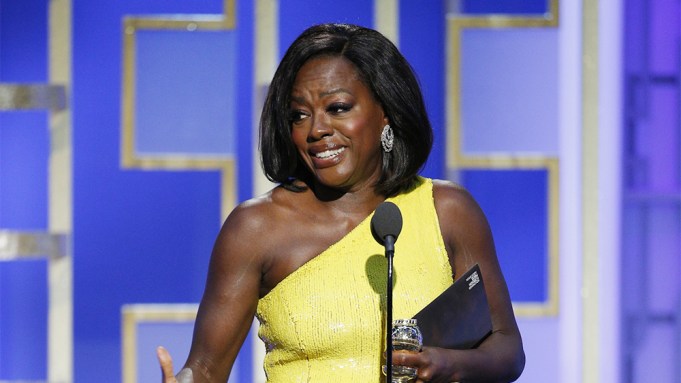 The fifth time was the charm for Viola Davis at the Golden Globes. The Emmy and SAG award winner finally scored her first Globe victory for her supporting turn in the feature film “Fences.”

Nominated twice before for her film performances in “The Help” and “Doubt” and twice for her TV star turn on ABC’s “How to Get Away with Murder,” Davis had previously lost out to Meryl Streep, Kate Winslet, Ruth Wilson, and Taraji P. Henson.

“This is my fifth nomination. I took all the pictures and went to the luncheon, but it’s right on time,” Davis joked upon accepting the award.

“To all the people who believed in this piece of work. It’s not every day that Hollywood thinks of translating a play to screen. It doesn’t scream money maker. But it does screams art. It does scream heart,” Davis explained.

Davis then addressed Denzel Washington. “Thank you for being an extraordinary leader, great actor, great director. Thank you for saying trust me, and remember the love.”

This year her acclaimed turn in “Fences” opposite director-star Denzel Washington topped fellow nominees Naomie Harris (“Moonlight”), Nicole Kidman (“Lion”), Octavia Spencer (“Hidden Figures”), and Michelle Williams (“Manchester by the Sea”) for the win. All five women will also contend for the SAG award on Jan. 29.

Davis plays Rose Maxson, the surprisingly formidable wife of Washington’s frustrated former baseball player Troy, in “Fences,” adapted from the 1983 play by August Wilson. Both Davis and Washington won Tonys for playing the roles on stage in a 2010 revival.

Davis’ previous awards history also includes two Academy Award nominations, two SAG awards for “The Help” (one as part of the ensemble cast) and an Emmy win and two more SAGs for “Murder.”

Backstage, Davis was relieved to win. “I’m not going to get in my jacuzzi because it’s going to be too late,” she told the press. “Probably take a shower and maybe have another glass of prosecco with my husband [Julius].”

When asked where her trophy would go, the actress explained, “My husband always takes care of the trophies because after tonight, I gotta put the trophy away and get back to work. He puts it in the office on a shelf.”