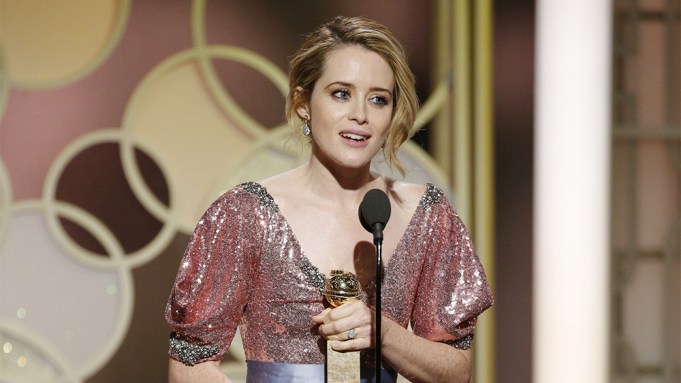 Claire Foy won the Golden Globe Award Sunday for best actress in a television drama, and thanked the monarch she portrays as she took the stage to accept.

Foy’s work as a young Queen Elizabeth II in Netflix’s “The Crown” earned her her first-ever Globe nomination. She has also been nominated for a Screen Actors Guild Award for the role.

Foy also gave a special shoutout to her co-stars John Lithgow, who beamed at her from the audience throughout the speech, and Matt Smith. Right after Foy won, “The Crown” took the prize for best TV drama.

Of that field, only Balfe was a returning nominee from last year. Taraji P. Henson, who won last year for her role as Cookie Lyon on Fox’s “Empire,” was not nominated this year. Last year, Henson beat out Robin Wright of Netflix’s “House of Cards”; Eva Green of Showtime’s “Penny Dreadful”; Viola Davis of ABC’s “How to Get Away With Murder”; and Balfe.