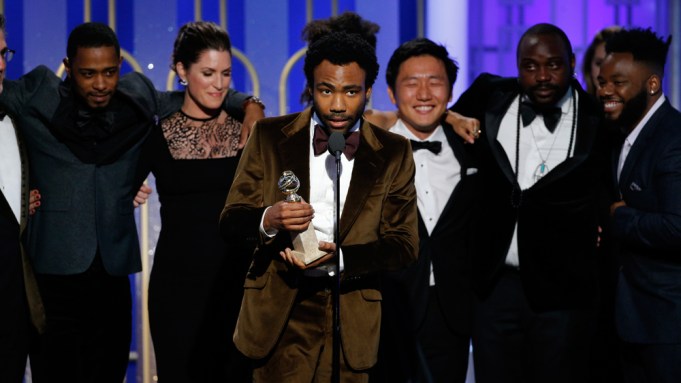 FX’s critically acclaimed “Atlanta” has won the Golden Globe for best television series comedy in its first year of eligibility.

The win continues a five-year streak of first-time nominees taking the prize, following Amazon’s “Mozart In the Jungle” (a first-time nominee in its second season) and “Transparent,” Fox’s “Brooklyn Nine-Nine,” and HBO’s “Girls.”

“Atlanta,” created by and starring “Community” veteran Donald Glover, is the first FX series to ever land a nomination in the category. It triumphed over a formidable slate of nominees including “Mozart,” “Transparent,” ABC’s “Black-ish,” and HBO’s “Veep.”

“This is incredible,” Glover said in disbelief. “I want to thank Atlanta and all the black folks in Atlanta, for real. For being alive and being amazing people.”

Since its Sept. 6 bow, “Atlanta” has emerged as one of the strongest new contenders on the small screen awards scene, landing key nominations from the Producers Guild and Writers Guild in recent weeks and was the only half-hour series besides “Veep” to crack AFI’s top 10 TV list.

The series also ranked as the best reviewed new show of the year on Metacritic, and topped Variety critic Sonia Saraiya’s picks for the best TV of 2016.