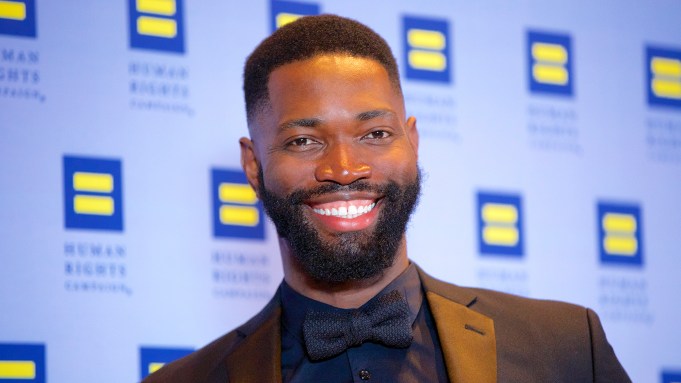 Last year, Jharrel Jerome missed out on watching the Academy Awards because his dorm room at Ithaca College didn’t have television. He had to find out who won by going online the next morning. In two weeks, Jerome will be boarding a plane to Los Angeles to watch the Oscars in the audience as “Moonlight,” the coming-of-age drama that marks his big screen debut, competes for eight statues, including best picture.

“Sometimes I have to stop and breathe,” Jerome told Variety at a gala on Saturday for the LGBTQ advocacy group, the Human Rights Campaign, where “Moonlight” was honored.

The crowded ballroom of the Waldorf Astoria was flanked by big names like Seth Meyers, Billy Eichner, Senate Minority Leader Chuck Schumer, NBC Entertainment chairman Bob Greenblatt, and Meryl Streep. It’s another reminder of Jerome’s whirlwind year in the spotlight, as “Moonlight” has transformed from a low-budget story of growing up gay in a crime-ridden section of Miami to a critical darling, art house breakout, and Oscar frontrunner.

“A year ago I’m in a dorm room hanging out with my friends, inviting them over, now I’m shaking Meryl Streep’s hand,” Jerome said with a chuckle.

Jerome plays Kevin, a bisexual teenager who forms a bond with the film’s central character. He filmed his part in 12 days.

“We put everything we had into it,” he said. “The set was small. The crew was small. It was so intimate. Going to the Oscars was never in our head.”

Jerome was at the Human Rights Campaign event to present a statue to Tarell Alvin McCraney, the playwright whose “In Moonlight Black Boys Look Blue,” inspired “Moonlight.” The story was a personal one for McCraney, who, like the film’s protagonist Chiron, grew up gay in a poor part of Miami with a mother who was a drug addict. McCraney said writing the play was a form of catharsis.

“It gave me the ability to say, I exist,” he said. “There is a reflection of me and a reflection of the people that I love and the values that I cherish or hold dear or don’t hold dear, there they are. Now that they’re out in the world I can move forward as a human being. I am connected to more than just myself.”

McCraney used his time on stage on Saturday to thank “Moonlight” director and writer Barry Jenkins for being an ally in the most forceful sense of the word. He said the relationship with the director had made him rethink a term that has become almost a cliched signal for a straight supporter for gay rights.

“It’s a tricky word,” he told Variety. “Sometimes when people say ally, they mean I’m going to stand by you as you fight. Especially in a world where people are physically being harmed, families are figuratively and literally being ripped apart, we can’t hope for allies who just stand by. When we do have people who are getting in the fight with you, we need a word to recognize what that is. How do we redefine the word in way that makes it about empowerment?”