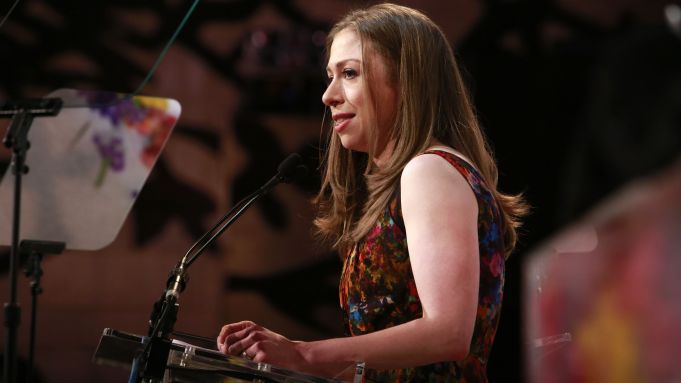 “Saturday Night Live’s” Vanessa Bayer made a pointed joke in her introduction at Variety‘s Power of Women New York luncheon on Friday.

Bayer listed all of the event’s honorees — Blake Lively, Jessica Chastain, Tina Knowles, Shari Redstone, Audra McDonald, Gayle King, and Chelsea Clinton — then observed, “They all have one thing in common. None of their moms are president.”

Clinton was quick with an optimistic response to the jab at her mother Hillary Clinton’s presidential election loss. “Vanessa, we may be able to say in this room today that no one’s mother is currently president, but some day, someone’s will be.”

Clinton received a standing ovation at the fourth annual event, where she was honored for her work with Alliance for a Healthier Generation, which fights childhood obesity through education and advocacy. “Understanding what a healthy meal choice is should not be a luxury in 2017 in the United States,” she said in her speech at the event.

“I’m particularly proud and grateful for the example that my mother has always set,” she said, recalling a lesson she learned from her grandmother that seemed particularly pertinent: “It’s always better to get caught trying than to have never tried at all.”