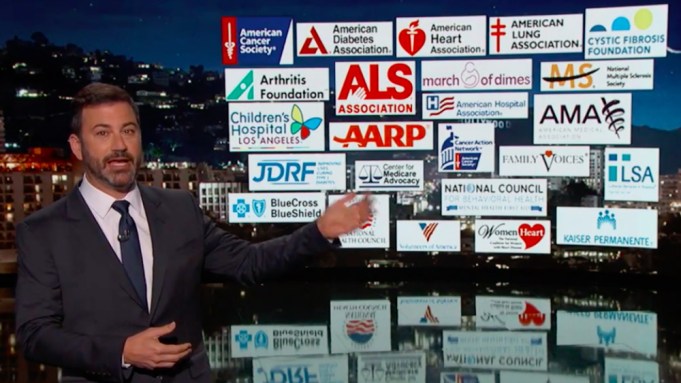 Jimmy Kimmel fired back at Republicans who have dismissed his criticisms of the GOP’s plans to repeal and replace Obamacare, once again using his monologue to urge viewers to call their senators to stop the pending legislation.

It was a the third night in a row that Kimmel has warned of a bill co-authored by Sen. Lindsey Graham (R-S.C.) and Sen. Bill Cassidy (R-La.).

On Tuesday, he called Cassidy a “liar” for coming on his show earlier this year and vowing not to support any legislation that does not guarantee affordable health care to families, particularly those with children who have pre-existing medical conditions. Cassidy had said he would not support any bill that did not pass the “Jimmy Kimmel test.”

But the Graham-Cassidy legislation, Kimmel said, “most definitely does not pass that test.” He noted that it weakens protections for pre-existing conditions, and would allow insurance companies to once again impose lifetime caps, among other things.

Kimmel also pointed to the array of groups that have come out against the Graham-Cassidy legislation, including the American Medical Association, AARP, and the American Cancer Society.

“We haven’t seen this many groups come froward to come out against a bill since Cosby,” Kimmel quipped.

The late-night host again skewered some of the reaction to his previous monologues. He showed a clip of Sen. John Kennedy (R-La.), in which he said of Kimmel, “I don’t think anyone would confuse him with a well-respected health care expert.” Critics have dismissed Kimmel as just a comedian and a member of the “Hollywood elite.”

Kimmel responded, “I am asking you: Why aren’t you listening to experts like the American Medical Association?”

He also said, even though he was not a health care expert, “I think people forget Bill Cassidy named this test after me. Am I supposed to be quiet about that?”

Then he played a clip of Trump on “Celebrity Apprentice,” saying his signature line, “You’re fired.”

“The guy you voted for president. His job was this. He fired Meat Loaf on television,” he said.

Kimmel initially started talking about the need for affordable health care earlier this year, after his infant son went through emergency heart surgery. At the time, Republicans were considering a different version of repeal and replace legislation, and Kimmel talked of how his situation would have posed dire problems for middle- and lower-income families who could not afford health care insurance.