Hillary Clinton: Facebook Has ‘A Long Way to Go’ in Disclosing Extent of Russian Election Interference 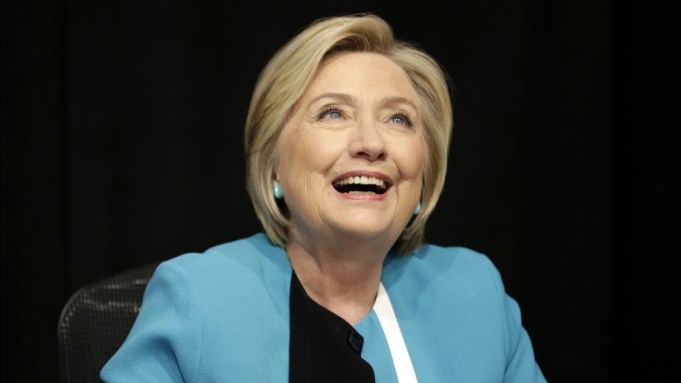 WASHINGTON, D.C. — Hillary Clinton says Facebook has “a long way to go” when it comes to disclosing the extent to which Russians used the platform to interfere with the 2016 election.

Appearing Thursday on “The Rachel Maddow Show,” Clinton said Facebook has “just begun to own up. They have a long way to go before they get where they need to be.” She also suggested that other tech companies had a duty to disclose whether their platforms were used for Russian interests.

Facebook acknowledged earlier this month that Russian-linked firms purchased ads during the 2016 campaign on certain divisive issues, although they have not found that spots were purchased to advocate for or against a specific candidate.

That has put a new level of scrutiny on Facebook, and whether it was used by Russian interests to sow discord in 2016 by spreading fake news stories and establishing fake accounts. Clinton cited those examples as ways that the regime of Vladimir Putin attempted to interfere with the electoral process.

Clinton said “transparency” was the best counter to Putin.

Asked about Clinton’s comments, a Facebook spokesman said, “We continue to investigate and will continue to work with the relevant investigative authorities.”

Earlier this week, Sen. Mark Warner (D-Va.), the ranking member of the Senate Intelligence Committee, said he would like representatives from Facebook and Twitter to testify before the committee as it investigates Russia’s interference in the 2016 campaign and whether any associations of Donald Trump coordinated or colluded with Putin agents.

In her interview, one of many she has given on the tour for her new book, “What Happened,” Clinton said Putin’s efforts to interfere with the election was “personal,” given the past criticisms she had made about his regime while she was Secretary of State.

“He saw me as someone who would stand up to him,” she said, adding that she thinks Putin has a broader goal of trying to “destabilize democracy” among western nations.

Clinton chided Trump’s administration for launching an investigation into voter fraud — which she called “voter suppression” — rather than of Russian interference in the 2016 campaign. “That is not happening,” she said.

Clinton said if she were elected, she would have established an independent commission with subpoena power and said, “We’re going to get to the bottom of this so it never happens again.”

She said the administration needed “to say, ‘We’re going to get to the bottom of this,’ and ‘We may have our disagreements among Americans. We are not going to let the Russians come in and divide us. We’re going to make Facebook own up to everything.'”

She added, “We have every right to have a vigorous debate in America, but we don’t want it to be interfered with and suborned by Putin and his allies.”