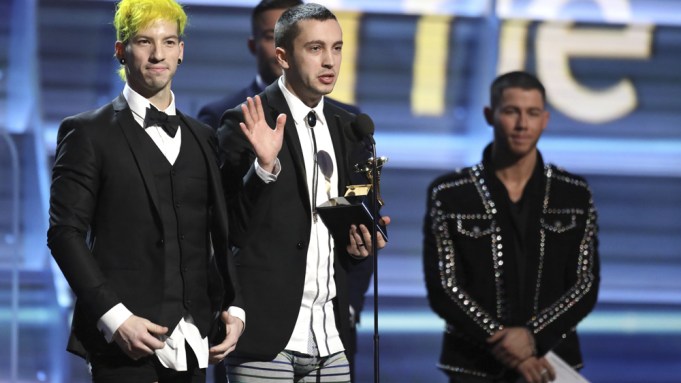 The Grammys ceremony certainly brings out the weirdest and wackiest in men’s and women’s fashion, but apparently sometimes it’s best do let the underwear do the talking.

Before Twenty One Pilots took to the Staples Center stage to accept their best pop duo/group performance award, the duo proceeded to remove their pants as an ode to their pre-fame days.

Tyler Joseph, who served as the pair’s spokesperson, explained the odd decision by saying he used to invite drummer Josh Dun over to his rental house to watch the Grammys with his friends.

“As we were watching, we noticed every single one of us was in our underwear,” Joseph said.

The peculiar fashion choice drew quizzical looks from the audience, but Joseph pressed on with his explanation.

“We said if we ever won a Grammy, we should receive it just like this (in our underwear),” Joseph concluded.

Strangely, the idea of cutting loose in the pants department seemed to catch on with Grammys host James Corden deciding to ditch his pants, too.

“Funnily enough I always promised myself if I ever hosted the Grammy Awards, I would do it in my underwear,” Corden quipped.

Corden’s boxer briefs almost matched Joseph and Dun’s, and while the joke was funny, the audience is probably hoping that’s the last of the pantless performers they see on stage.