Taylor Swift Battles Herself in ‘…Ready for It?’ Music Video 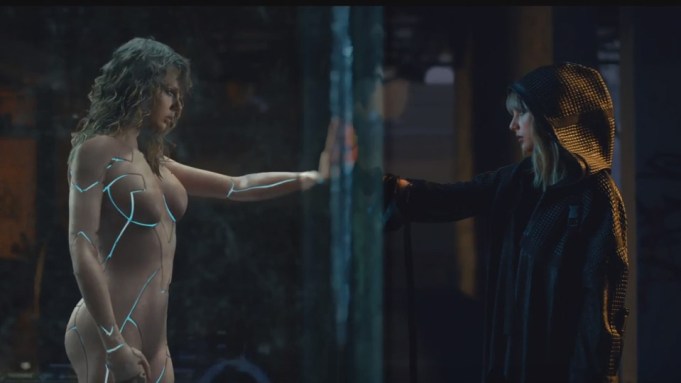 Swiftie are sure to rejoice with the debut of the “…Ready for It?” music video, which may be Taylor Swift’s most CGI-heavy music video to date — in close competition with “Bad Blood” and “Look What You Made Me Do,” also directed by Joseph Kahn.

The video, which dropped Thursday night, depicts Swift in an “Ex Machina” meets “Westworld” meets “Blade Runner” scenario, in which a cloaked Swift navigates through a graffitied and tech-heavy landscape until she meets an AI version of herself contained within a force field-constructed cage. The original Swift is revealed to be a replicant, however, when her AI version bests her in a confrontation after trying different forms to escape, and ascends out of the building.

Kahn has directed several of Swift’s videos, including “Blank Space,” “Wildest Dreams,” and “Out of the Woods,” in addition to “Bad Blood” and “Look What You Made Me Do.”

“…Ready for It?” is the second single from Swift’s forthcoming album “Reputation” to get a music video. The much-anticipated album hits shelves Nov. 10. Swift teased the first footage from her “…Ready for It?” music video via Instagram Monday.

The video for “Look What You Made Me Do,” which premiered at MTV’s VMAs, featured Swift quite literally rising from the dead as a zombiefied version of the pop star crawled from a grave. The video became much more glamorous as Swift bathed in a tub of diamonds before cutting to a shot of her on a golden throne, snakes popping up behind her.