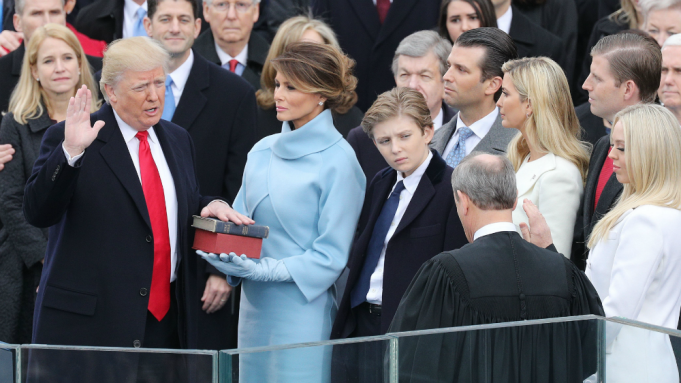 Spike Lee and singer-songwriter-playwright Stew, who won a Tony in 2008 for his work on the musical “Passing Strange,” have teamed up for a spectacularly unsubtle commentary on Donald Trump’s presidency. Lee directed a video for Stew and his band The Negro Problem’s song “Klown Wit Da Nuclear Code,” which is pegged to Independence Day. The two previously worked together on a feature film of the Broadway production of “Passing Strange.”

The clip features the lyrics of the song running over relevant photographs from Trump’s presidency and campaign.

“This song is in the American tradition of protest songs,” Lee said in a statement. “The lyrics are self explanatory — there’s a reason the words appear on the picture. There is no album [attached to the song], it’s one and done (and hopefully not the end of the world as we know it).”

Stew (real name: Mark Stewart) is most renowned for “Passing Strange,” a musical about a young African-American’s self-discovery as he traveled through Europe. Stew wrote the book and lyrics for the show, performed as its narrator, and co-wrote the music with Heidi Rodewald. The show was nominated for five Tonys and won for best book; it also won two Obie Awards. Stew and Rodewald also collaborated on “Making It,” a song-cycle for the rock band and video, which was commissioned by and performed at St. Ann’s Warehouse in February of 2010. In October of 2010, “Brooklyn Omnibus,” another live song-cycle with video, was commissioned by the Brooklyn Academy of Music and performed there. “The Total Bent,” a musical developed at the Public Theater Lab in the winter of 2012, finished a twice-extended run at the Public in the summer of 2016.

In addition to his work on Broadway, Stew has released eight albums, either solo or with The Negro Problem, since 2000.