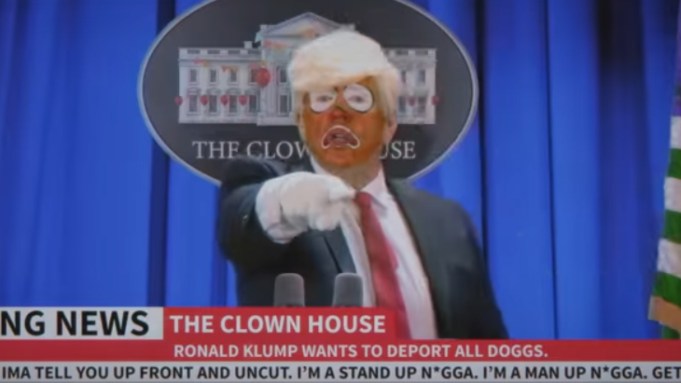 Snoop Dogg aims a toy gun at a clown dressed as President Donald Trump in his new video for “Lavender,” a remix of the electro-psych song by BadBadNotGood and Kaytranada.

In a world filled with clowns, comedian Michael Rapaport stars as an average husband and father who gets shot by a police officer after getting caught smoking weed while driving. A bystander captures footage of the event on his cell phone, which he proceeds to upload on the website “ClownTube.” Snoop Dogg uses the lyrics of the song to criticize police brutality: “Trying to keep from dying in these motherf–in streets/ F— the police, from a black man’s point of view.” In a later scene, Snoop Dogg appears smoking weed next to a chained-up clown version of Donald Trump, or in the words of Snoop Dogg, “Clown-in-Chief Klump.”

PrankvsPrank YouTube star Jesse Wellens, who co-directed the video with James DeFina, conceptualized the video during an October smoking session with Snoop Dogg. In an interview with Billboard, Wellens explained that he was partly inspired by the fatal police shooting of Philando Castile in July.

“I just had been seeing this go on in the world politically, and I actually was a cop for six years in the military, so I can kind of see it from the cop’s point of view too,” Wellens tells Billboard. “When I originally wrote the idea of the video, the video of [Philando Castile] getting shot came out online and it was causing riots. We just kind of wanted to bring the clowns out, because it’s clownery — it’s ridiculous what’s happening.”

Snoop Dogg elaborated on Wellens’ statement, adding “the whole world is clownin’ around, and [Jesse’s] concept is so right on point with the art direction and the reality, because if you really look at some of these motherf–kers, they are clowns.”