"A man who learned from the greats & could craft an effortless, classic pop song," wrote Mark McGrath of the Smithereens singer. 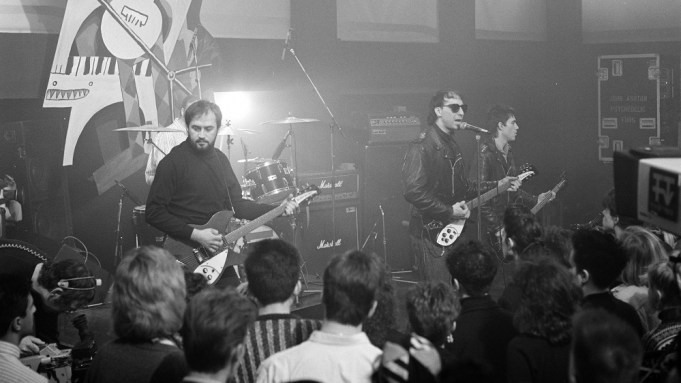 News of the Dec. 12 death of The Smithereens founder and singer Pat DiNizio came as a shock to fans and the music community, particularly as the band had announced they were about to head out on a tour in January. The trek included a date at the Count Basie Theatre in Red Bank, NJ with Scandal.

The Smithereens formed in Carteret, New Jersey in 1980 and were regarded as an influential group in the Garden State, scoring two alternative radio hits with “Only a Memory” in 1988 and “A Girl Like You” in 1989.

Smithereens drummer Dennis Diken honored his friend with a touching post on his Facebook page, remembering how the songwriter had the “magic touch” with “hook-laden three minute pop songs.”

Shortly after the band posted the sad news, musicians and radio personalities expressed their grief on social media. And speaking to Variety the following morning, Jon Bon Jovi commented that DiNizio’s death was “tragic,” adding, “He was one of our family of New Jersey musicians. He will be in my prayers today.”

Heartbroken to hear of the passing of my lifelong pal, @PatDinizio of @TheSmithereens. Rest in peace, dear friend. pic.twitter.com/SqL5zYLuiR

Oh no Pat DiNizio has passed away. Loved him. We did an amazing song together yrs ago.

Very sad to hear of the passing of Pat DiNizio. Always enjoyed speaking with him and hearing him play. R.I.P. Pat. #smithereens https://t.co/MSnO6sSzyM

Really sorry to hear about the passing of Pat DiNizio of the Smithereens, a man who learned from the greats & could craft an effortless, classic pop song…had the pleasure of meeting him a few times, he was complimentary & down to earth. Rest easy thanks for the music & memories

Aw, man. Knowing that The Smithereens were a staple at my hometown’s Dirt Club early on, actually helped me understand that good songs, hard work, and a love of playing music can be a path to making some kind of life out of it. https://t.co/v56URCccLL

Alabama: phew. #PatDiNizio : Ow. RIP. @TheSmithereens were a big influence on my early work. Here's one of Pat's many great tunes https://t.co/24E46iBXVw

RIP Pat Dinizio. I’ll never forget those great nights hanging and playing guitar. I miss those nights and will miss you and your music even more. Heaven just got a little hookier. pic.twitter.com/nXTrUTCF8d

Just now learning of the passing of Pat DiNizio of The Smithereens. I knew Pat and interviewed him a few times for VH1 Classic back in the day. Jersey legends, great band! Condolences to his fans, friends, family.

The Smithereens – Drown In My Own Tears https://t.co/CPP3d3wbFJ via @YouTube
This song encapsulates the emotions I feel at the news of the death of the under appreciated singer-songwriter guitarist Pat DiNizio. Those of us who really heard you knew you were The Best. UnSung.
🌹

RIP Pat DiNizio. A very talented friend. Among his many other accomplishments, he was one of the instructors we chose for the actors in David Chase’s Not Fade Away. https://t.co/sRPTQIN5KU

So shocked and saddened by the death of my friend Pat DiNizio, a generous, kind, wonderfully talented musician, singer and bandleader. https://t.co/b56csWl3Lz