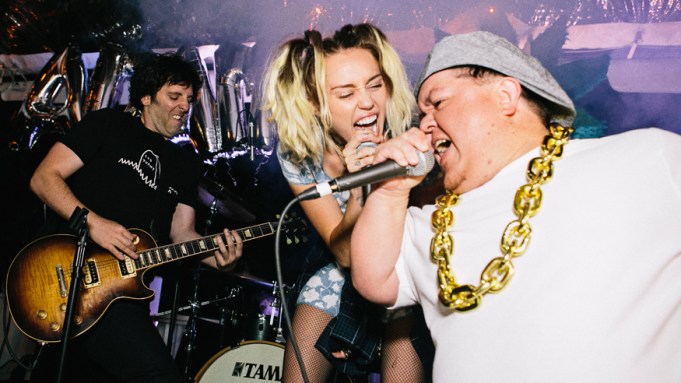 Some people opt for an intimate dinner with friends to celebrate a milestone birthday, but manager Adam Leber, whose clients (with partner Larry Rudolph) include Miley and Noah Cyrus, Britney Spears and Fifth Harmony, ushered in his 40th with a party worthy of any rock star and complete with some top-notch shredding courtesy of Miley Cyrus and music executive Ron Perry, the president of SONGS Music Publishing who signed Lorde and The Weeknd to lucrative publishing deals.

Other artists to take the microphone at the Saturday night bash in the Hollywood Hills included Sia, Labrinth, Noah Cyrus and Phantogram’s Sarah Barthel, but judging by social media, the highlight for the 200 friends and colleagues was Cyrus and Perry’s take on Nirvana’s “Smells Like Teen Spirit.”

Video of the performance (watch below) shows Cyrus delivering a true-to-the-original guttural vocal that’s perfectly in tune with Perry’s on-point guitar playing, even more impressive considering it was completely impromptu, according to several partygoers, and in front of a crowd of heavy-hitters from every corner of the entertainment industry.

Check out the video here or above.