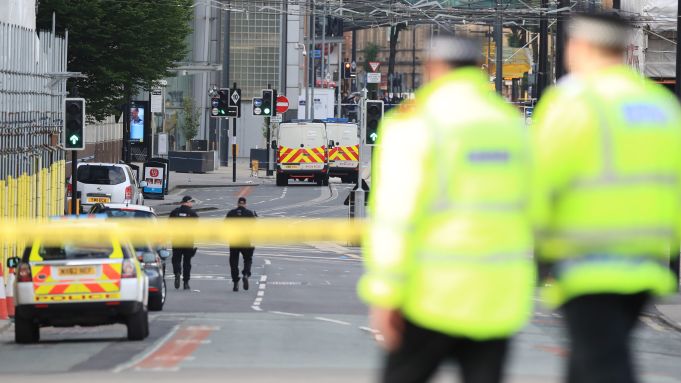 UPDATED: Police in Britain have arrested six men and one woman in connection with this week’s bombing at the Ariana Grande concert that killed 22 people and injured more than 60 others.

Late Wednesday, two men and a woman were arrested as authorities continued their investigation. Three men were arrested during raids on properties in south Manchester overnight. Another suspect, an unidentified 23-year-old man, was arrested Tuesday, bringing the total number of arrests to seven. The BBC has reported that one of the men in custody is the brother of suspected bomber Salman Abedi.

“I think it’s very clear this is a network we’re investigating. There’s extensive investigations and activity going on across greater Manchester as we speak,” Chief Constable Ian Hopkins said during a Wednesday afternoon press conference.

Hopkins also said that the next of all the fatalities have been notified, and that one of the victims was a serving police officer. The full list of casualties will be released in coming days.

Abedi, 22, was known to authorities, British Home Secretary Amber Rudd said. Investigators are trying to determine whether he had ties to terrorist organizations such as ISIS, which has claimed responsibility for Monday night’s deadly blast at the Manchester Arena.

“It was…more sophisticated than some of the attacks we’ve seen before,” Rudd said. “And it seems likely, possible, that he wasn’t doing this on his own, so the intelligence services and police are pursuing their leads in order to make sure they get all the information.”

British media reports said that Abedi had links to Libya and had traveled to Syria.

Late Tuesday, the British government raised the national terror threat level to “critical,” which means that a terrorist attack is not just likely but possibly imminent and that military personnel can be deployed in public places to reinforce police.

Police presence has been significantly upped in Manchester and across the U.K.

On Wednesday, the changing of the guard at Buckingham Palace, one of London’s most popular tourist attractions, was canceled so that officers could be redeployed. Access to the Houses of Parliament has also been restricted.