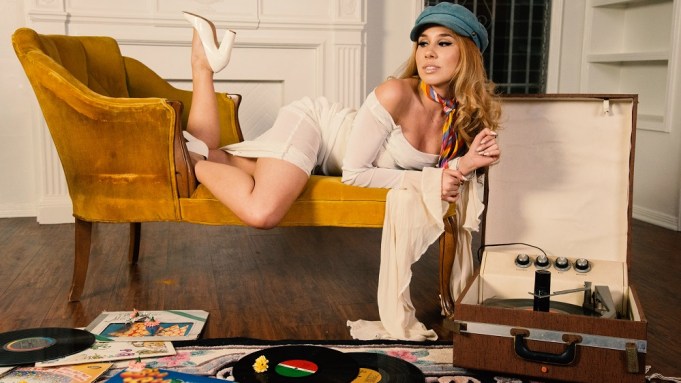 “American Idol” alum Haley Reinhart was born in 1990, but her forthcoming album, “What’s That Sound?”, pays tribute to an earlier era — the tunes she heard her parents listen to in the 1960s.

“The ’60s were a time when people came together through love and rock ’n’ roll,” the Wheeling, Illinois, native tells Variety. “People didn’t believe in the hype; they questioned authority and stood up for justice. It was a beautiful time for music with a heavy wave of open consciousness. Our world today has that same sense of hopeful urgency, and I think it’s important to keep this music and the positive messages alive and current.”

The first song released from Reinhart’s label debut for Concord Records was an update of the Shirelles’ “Baby It’s You,” later recorded by the Beatles and the band Smith. The second track, “The Letter” — premiering Thursday — was a No. 1 hit for the Box Tops in 1967.

“‘The Letter’ is such a cool, timeless tune,” says Reinhart. “One of my earliest memories is crowding around my grandma’s piano listening to my Aunt Janice and Uncle Tom sing and play it. My uncle can sound just like Alex Chilton and the Box Tops with his guttural, sandpaper-like tone, while my aunt would harmonize with her soulful pipes. I thought it would be really neat to bring it up a couple of keys and give a woman’s take on the tune. It’s such a unique, upbeat song with gritty vocals, horns and sweeping strings. It’s become a pop standard to many and I’m so happy I got to put my own spin on it.”

Wayne Carson Thompson was inspired to write “The Letter” by his father. “My dad had the first line,” the songwriter said in a 1984 interview. “He was a songwriter of sorts. He would come up with ideas and pass them on to me. ‘Give me a ticket for an aeroplane’ was all he had. I took that one line and wrote the rest of the words and the melody.”

There have already been two remakes of “The Letter” on the charts. The Arbors, a vocal quartet from Ann Arbor, Mich., had a top 20 hit in 1969, while Joe Cocker brought the song back to the top 10 in 1970. Reinhart isn’t the first female singer to cover the song, though: Dionne Warwick got some airplay with her rendition, but it wasn’t released as a single.

“What’s That Sound?” will be released Sept. 22 and features Reinhart’s musician parents, Patti and Harry, on some tracks, including “The Letter.” “It was so special having my mom and dad on this tune, among many others on the album,” says Reinhart. “We recorded to 24-track two-inch analogue/tape, using old vintage gear. It’s important to me to not only remain authentic to the time as well as my own artistry, but really pay tribute to these amazing artists who have given us the soundtrack of our lives.”