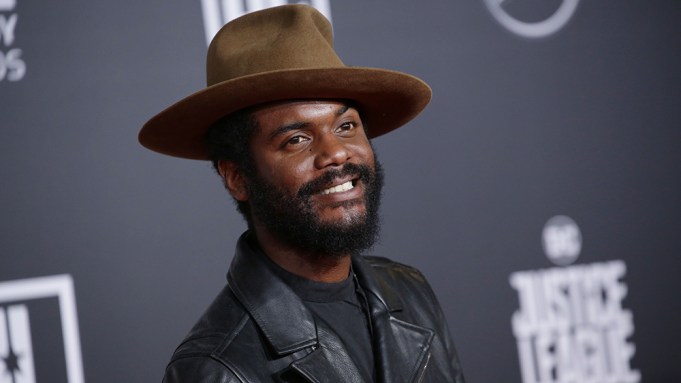 To a lot of music fans of the post-rock generation, “Guitar Hero” is the name of a console game, not something that comes along in real life in the 2010s. Gary Clark Jr. is among the very few of those who’ve been minted lately. He may or may not count as an actual superhero, but there are enough of those to go around in the new “Justice League” film, which has his and Junkie XL’s cover of the Beatles’ “Come Together” as the principal theme.

On a less heroic note, Clark Jr. also recently collaborated on a cover of Neil Young’s “Ohio” for a very different screen project, Ken Burns’ “The Vietnam War.” Variety spoke with the blues-rocker about both recordings, his Batman wanna-be inclinations, and how he plans to mix blues and hip-hop on his next album.

You’re going to be playing “Come Together” a lot on TV this year. It’s so non-linear, and almost song-length onomatopoeia — isn’t it hard to get all of Lennon’s lyrics in the right order?

I’m just now starting to remember all the words. I definitely had the lyric sheets for awhile. The first time I tried it without, I messed up. It’s working out, though. Everybody knows it anyway, so they’ll sing it for you… Do you know what “toe-jam football” is?

I remember trying to look it up a long time ago, but, basically, no. What is it?

I don’t know, either. I’m trying to figure out what it is. I’m asking anybody.

Was it a producer’s idea that they wanted you to sing “Come Together” for the movie, or Junkie XL’s?

Honestly, I’m not sure whose actual idea that was. But from what I gathered, Junkie XL took the ball and ran with it and came up with this new idea and produced the track. I came up last in the conversation. I was up for doing something new, too, collaborating with somebody, especially Junkie XL. I had never really heard of him. I didn’t know anything about him, so I kind of checked him out and thought we should get in the studio and see what happens. They wouldn’t even tell me what the project was for. I didn’t really know what I was getting into. I just knew I was going to play this song and hang out with these guys.

So was the only thing you really knew was that it was for a Warner Bros. project?

Yeah, I knew they were working on something, but I wasn’t privy to the information yet. They wanted me to be a part of it, so it was like, “You’re great, but we don’t quite trust you.” It’s all good, though. I get it.

Of course, Aerosmith did it for a movie, too, but the film was such a flop it didn’t have much longevity.

What was the movie? I don’t know.

“Sgt. Pepper’s Lonely Hearts Club Band,” in the late ’70s. Aerosmith had the only moment in the movie that rocked — which meant they had to be the villains and get beaten up by Peter Frampton and Bee Gees.

Aerosmith did that cover? I’ve got to go back and see that. No, I never heard that version.

You get to sing the song for a movie without getting killed on-screen at the end of it, which is a much better deal. Anyway, presumably you have no problems with being associated with a comic book movie?

Oh yeah, I’m totally with that. I haven’t seen it yet. I’ve been teased like everybody else. But I think (being connected with “Justice League”) is great. When I found out that I wouldn’t grow up to be Batman, I was a little bit disappointed. So to get to play a Beatles song in a movie with that, it’s pretty cool. And my (3-year-old) son thinks I’m cool, so I’m good.

You’ve been collaborating with rappers for your next album, so the idea of working with an electronica-type guy like Junkie XL probably didn’t take you aback at all.

No, no, no. It goes along with growing up in Austin and running around down on 6th Street, being exposed to everything. I had friends who are just musically creative people, so it didn’t matter what genre. It was young folks excited about making noise and creating something, and we all just wanted to hang out and vibe together. So I was listening to electronic music, blues, jazz, country, folk, rap. I would have rappers at my house and Chris Layton (the drummer for Stevie Ray Vaughan’s Double Trouble) at my house. I didn’t really think much about it. So when I step into any sort of situation, I feel like I know what’s up, a little bit, and how to approach things.

Being around all those influences, was it still easy to stick to the essence of what you do and not dilute it too much?

The essence of what I do is not really thinking too much or putting boundaries on it. My whole foundation is based in blues, and that’s what I have a reputation for doing. But I’ve always been somebody who said that I don’t know what to expect of myself, so you shouldn’t expect anything from me. We’ll do all kinds of different things. I’ll hear some comments from people who say stuff to me when I go back home: “Hey, just stick to blues.” That’s easy to say, but as a human being, and somebody who doesn’t want to stay in the same place, to not experiment and explore and try to discover new things would be a waste of time for me, personally. I’m curious.

You had a live album this year (“Live North America 2016”), but it’s been a couple of years since a studio album. You were talking early this year about already working on something. Warner Bros. must be pressuring you for another studio album… or maybe you’re pressuring yourself.

It’s a little bit of both. I like it that way. I’m in the studio right now being all kinds of creative. I’ve got years’ worth of notes on my phone I’m sifting through.

And you’ve said you’re working with a couple of Austin rappers for the next album?

Yeah, Zeale and Phranchyze are the guys. These are my boys from way back, and we’ve been talking about doing something forever. Like I was saying about growing up — I had this house and they would come over when I was starting to get familiar with the computer, and I would run ProTools and work on beat machines and sampling records… doing all that Junkie (XL) stuff, and they would come over to the house and rap on it. So I had some time and they had some time, and we said, man, let’s do that thing we’ve been talking about doing for over a decade. It’s fun, but it’s serious. I think we’re onto something really great. These are two of the most talented emcees that I’ve ever been around or seen live. We think the same way when it comes to being able to improvise and feed off the energy and flow. You should look out for that.

“Come Together” isn’t the only song you’ve covered recently from that era. You also took on a classic Crosby, Stills, Nash & Young protest song, “Ohio,” for Ken Burns’ Vietnam documentary.

Yeah, me and Leon Bridges and Jon Batiste got together and did that. I love that song, man. I’d heard it before, but I never really listened — you know what I mean? It was heavy. It translated and felt relevant to the time, now. I’ve been trying to hang with those guys for a minute. Leon and I will always hang out when we run into each other, because fellow Texans, we’ve got to stick together. [Bridges also made a guest appearance on Clark Jr.’s live album this year.] We didn’t know how we were going to approach the song, and Jon got that piano intro and we just kind of followed. We laid down a lot of other ideas over a few days, so hopefully we can get back together and (complete) that.

People often point to “Ohio” as the kind of rock song we should get now and don’t. Was it inspirational for your own stuff? You’ve said the next album might be darker.

Yeah. I think when I write, I feel a certain way with whatever’s happening in the news at the time. Definitely in the writing process, there’s a lot less to draw from right now on the lighter side, or maybe that’s what’s got my attention.

Yeah, you could go all over the place. I say this a lot, but I think it’s important to say it again to myself, too: It’s important to understand how powerful your microphone is, and if you get an opportunity to speak into one, you should really think about what you’re gonna say before you say it and think about how it affects people and not just yourself. That’s why I love artists like Bob Marley [he sang “No Woman, No Cry” at the recent “Exodus 40” tribute concert in L.A.] and the Beatles and Marvin Gaye and Curtis Mayfield — and Tupac, too — folks that asked questions and had something to say. I love partying and everyone having fun, but those guys that make me really draw back and actually think about what I need to pay attention to and how I should move forward… it’s powerful, and I want to be a part of it. Otherwise I’m wasting my time or this gift for selfish reasons. Being a rock star is cool, but what else?