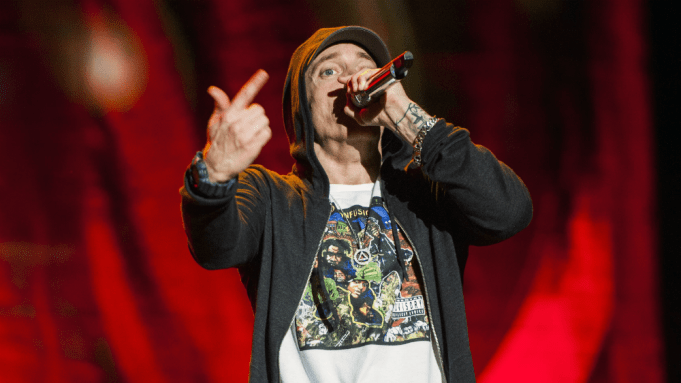 Eminem did not mince words when he went after President Donald Trump in a freestyle rap broadcasted during the BET Hip-Hop Awards.

Deemed “The Storm” by the Grammy-winning rapper, the cypher performance clocked in at nearly five minutes, in which Eminem referred to Trump as a “bitch,” and attacked him for his response to Charlottesville and his focus on NFL protestors.

“This is his form of distraction/ Plus, he gets an enormous reaction/ When he attacks the NFL, so we focus on that/ Instead of talking about Puerto Rico or gun reform for Nevada/ All of these horrible tragedies and he’s bored and would rather cause a Twitter storm with the Packers,” he rapped.

Eminem also took aim at his Trump-supporting fans in the video, filmed Friday in his hometown of Detroit.

“And any fan of mine who’s a supporter of his/ I’m drawing in the sand a line/ You’re either for or against,” he continued. “And if you can’t decide who you like more in your split/ On who you should stand beside/ I’ll do it for you with this/ F— you.”

The rapper concluded by raising a fist in the air — which he said was for Colin Kaepernick, who set off the NFL controversy back in 2016 — and said,”The rest of America stand up. We love our military and we love our country, but we f—ing hate Trump.”