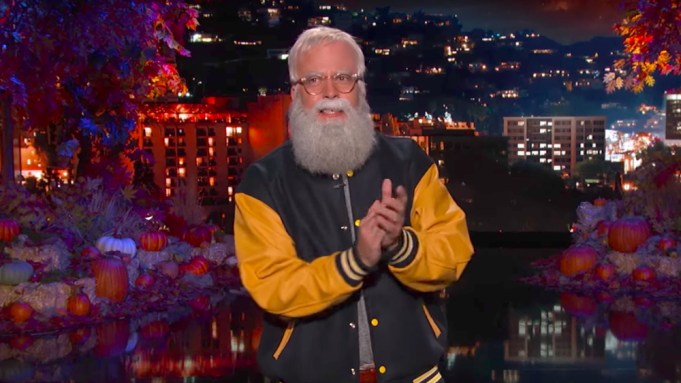 He began the monologue telling audience members he was Dave Letterman Grohl. “Yes, I’m Dave Grohl, dressed as David Letterman, in for Jimmy Kimmel. It’s confusing, I get it, especially if you’re home watching right now stoned to the bone,” he joked.

After introducing the house band and Kimmel’s sidekick Guillermo — who were all dressed as famous musicians — Grohl expressed his contempt with society moving away from the true meaning of Halloween. “So who wants to meet me after the show in the woods and sacrifice a goat to our dark lord, Satan?” Grohl asked a cheering crowd.

And with Kimmel out this week, Grohl answered the much-anticipated question of, “Will his show still be making kids cry on Halloween?” referencing a popular segment where Kimmel invites parents to tell their kids they ate all of their Halloween candy and record the reactions.

“The answer is yes, of course, 100%,” the musician verified before inviting the audience to participate in the seventh annual tradition. “This is your chance to get back at your kids for making you listen to the ‘Moana’ soundtrack every day on the way to school,” he told parents.

Grohl then hosted the Half & Half Halloween Pageant, which features mashups of two different costumes to “create a weird a– masterpiece.” Participants dressed up as The Handmaid’s Snail, Benja-Minion Franklin, Barney Sanders, and Mr. E.T.

Later in the show, Grohl interviewed Alice Cooper and Kristen Bell, who performed a “Frozen” and Metallica remix.

Watch the full monologue here or above.