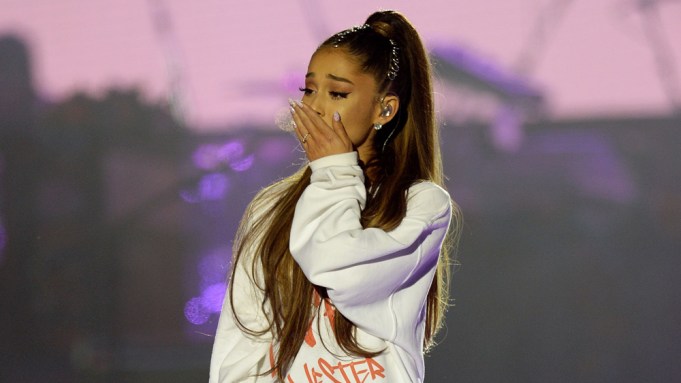 Ariana Grande closed “One Love Manchester” with an emotional rendition of “Somewhere Over the Rainbow” on Sunday. The benefit concert was organized to honor the 22 victims who were killed by a suicide bomber when Grande’s “Dangerous Woman” tour let out on May 22.

Grande teased a faux finale of “One Last Time” alongside all of her musical guests towards the end of the show. However, once the other musicians exited the stage, Grande returned without a word. She simply looked up at the sky from the end of her platform, and began singing “Somewhere…” A lifelong Judy Garland fan, this was Grande’s first time performing “Somewhere Over the Rainbow” onstage.

After her beautiful and understandably teary-eyed version of “The Wizard of Oz” classic, she concluded the show, telling Manchester “Thank you so much, I love you.”

She fought the urge to cry while blowing kisses to her fans as she exited the stage. Grande’s mother and brother watched from a private perch, with Frankie Grande in tears.

See Grande perform “Somewhere Over the Rainbow” at “One Love Manchester” above.