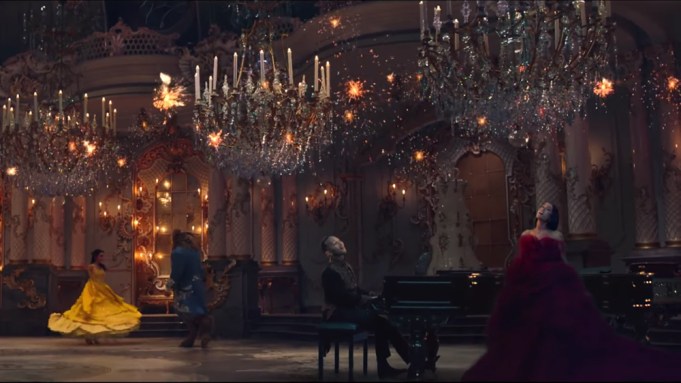 It may be as old as rhyme, but the “Beauty and the Beast” theme song has gotten a fresh take courtesy of Ariana Grande and John Legend.

Disney debuted the music video for the duo’s interpretation of the classic tune Sunday night on Freeform, and it’s since racked up more than 2 million views on Vevo.

The video opens with Grande — dressed in a red princess gown — looking at herself in a mirror while perched atop the balcony of a castle. A group of dancers — also in red — then form a circle around her, creating a rose with their costumes.

Legend, meanwhile, plays piano inside the grand ballroom. Grande later sings alongside him while Emma Watson as Belle and Dan Stevens as Beast dance in the background. The video also features other scenes from the movie, including ones with the anthropomorphic dinnerware.

Emma Thompson — aka Mrs. Potts — sings the theatrical version — made famous by Angela Lansbury in the original 1991 animated film. The song earned Celine Dion and Peabo Bryson a Golden Globe and Academy Award.

The “Beauty and the Beast” soundtrack — featuring Dion, Josh Groban, Audra McDonald, and others — is available on Friday, while the movie hits theaters a week later on March 17.