Film Review: ‘Valerian and the City of a Thousand Planets’

'Lucy' director Luc Besson returns to the realm of sci-fi, serving up an expansive, expensive adventure whose creativity outweighs its more uneven elements. 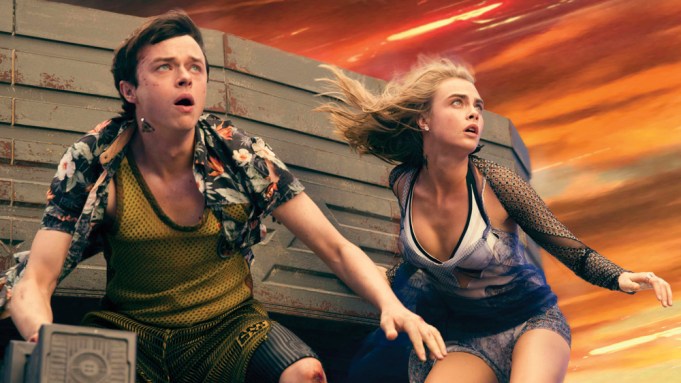 A long time ago in our very own galaxy, Luc Besson dreamed of directing a movie version of “Valérian and Laureline,” a sexy French comic book series featuring a pair of futuristic crime fighters who travel through space and time to uphold the law. Although scholars consider the pulp source material to have been an influence on George Lucas’ original “Star Wars” movie, the equation clearly works the other way around in Besson’s hands, as “Valerian and the City of a Thousand Planets” finds the director doing his best “Star Wars” impression.

It’s a bold goal in a marketplace that hasn’t traditionally been very welcoming to “Star Wars” imitators, but Besson is one of the few living directors with both the ambition and the ability to establish his own rival universe. At a time when “Star Wars” itself has gone corporate (granted, the tight control has yielded some of the series’ best entries), “Valerian” manages to be both cutting-edge and delightfully old-school — the kind of wild, endlessly creative thrill ride that only the director of “Lucy” and “The Fifth Element” could deliver, constructed as an episodic series of missions, scrapes and near-misses featuring a mind-blowing array of environments and stunning computer-generated alien characters.

Too bad Valerian himself is such a dud. Written as a kind of cocky intergalactic lothario, Valerian ought to be as sexy and charismatic as a young Han Solo, though “Chronicle” star Dane DeHaan — so good in brooding-emo mode — seems incapable of playing the kind of aloof insouciance that made Harrison Ford so irresistible. Despite holding the rank of major, Valerian looks like an overgrown kid, overcompensating via an unconvincingly gruff faux Keanu Reeves accent (with the questionable dye job to match).

Fortunately, his co-star is cool enough for the both of them: As played by British fashion model Cara Delevingne (downright wooden in last summer’s “Suicide Squad,” but a revelation here: sassy, sarcastic and spontaneous), Laureline holds true to one of Besson’s core beliefs — that nothing’s sexier than an assertive, empowered leading lady. Sure, she needs rescuing at times, but more often than not, she’s the one getting Valerian out of trouble. She’s just a sergeant, but every bit as capable as her commanding officer, and the film is considerably more fun when following her character.

The chemistry between the two may be odd, but they make a good team, constantly trying to prove themselves to one another while each pretending not to care. In their first scene together, Valerian asks Laureline to marry him — a strangely old-fashioned demand, given the 28th-century setting, that plays like a 1950s ploy to seduce the virginal preacher’s daughter. And yet, in so many ways, she seems worldlier than he does, right down to the film’s climactic monologue, in which Laureline lectures Valerian on the meaning of love.

Most of the time, he’s too busy following orders to question what his superiors are asking, but such blind obedience has its bounds, since the plot of “Valerian” concerns a vast military coverup for a cataclysm Besson depicts in the film’s opening minutes: the near-annihilation of a seemingly primitive, yet peaceful species known as Pearls. Tall, slender and scantily dressed, like “Avatar’s” Na’vi, with bald heads and iridescent opaline skin, the Pearl are the most elegant and expressive of the movie’s many computer-generated aliens. Their long limbs give them a graceful, supermodel gait, while their faces are nuanced enough to convey even subtle emotions — testament to just how sophisticated performance capture technology has become, even in someone other than Andy Serkis’ hands.

Such innovations make it possible for Besson to build upon the multiculturalism of the “Star Wars” series in a big way, taking the intermingling of species in the classic cantina scene and expanding it to a vast city named Alpha, where a seemingly infinite number of aliens happily stick to their roles (like a pre-equal-opportunity Zootopia), while humans of all colors run the show (including Herbie Hancock as the city’s Minister of Defense). No doubt, there are dark and sordid “Blade Runner”-esque corners to this hyper-modern megalopolis, but Besson never lingers long enough for us to play more than fly-by tourist as he follows Valerian and Laureline through these various realms.

Generally speaking, Besson works at a fast clip, using dynamic framing and tight editing to convey loads of visual information on the go. The movie is designed to propel us from one cliffhanger to the next, and it’s remarkably effective at doing so without providing a clear notion of what the duo’s mission is supposed to be. Early on, they’re sent to Big Market, a massive virtual-reality bazaar where Valerian manages to retrieve an adorable, ultra-rare creature known as a Mül Converter, which can make copies of anything it ingests (except itself, apparently), from a Jabba the Hutt-like black marketeer voiced by John Goodman.

The movie kicks in during the Big Market sequence, which is where audiences first feel like we’re discovering a truly visionary new environment for the first time — though Besson manages to sustain that effect throughout the film’s time on Alpha. There we meet Commander Arun Filitt (Clive Owen), the four-star general who’s been using Valerian to help fulfill his own dastardly agenda, and discover a world of eye-popping costumes. Besson’s script may occasionally leave something to be desired, but one can hardly fault the way his characters are dressed, as costume designer Olivier Bériot gives us a sample of the future of fashion (so avant garde that it could take decades for sci-fi to catch up).

In one case — that of a glampod named Bubble (played by Rihanna, when in human form) — a shape-shifting alien actually functions as a kind of elaborate costume, wrapping herself around Valerian so he can infiltrate the dangerous gourmands who plan to eat his darling Laureline. In a nifty trick, Bubble can remove her hat and change outfits entirely, making for the galaxy’s sexiest exotic dance routine.

Even Besson, who convinced the world that Milla Jovovich could act (in “The Fifth Element”), can’t salvage Rihanna’s awkward line readings — unless that’s the effect this sophisticated, Shakespeare-trained glampod is going for. But that’s a small hiccup considering what the director gets from Delevingne: She doesn’t just save Alpha; she saves the movie as well. And though audiences may not be clamoring for a “Valerian” sequel after this, another “Laureline” adventure would be most welcome.

Film Review: ‘Valerian and the City of a Thousand Planets’