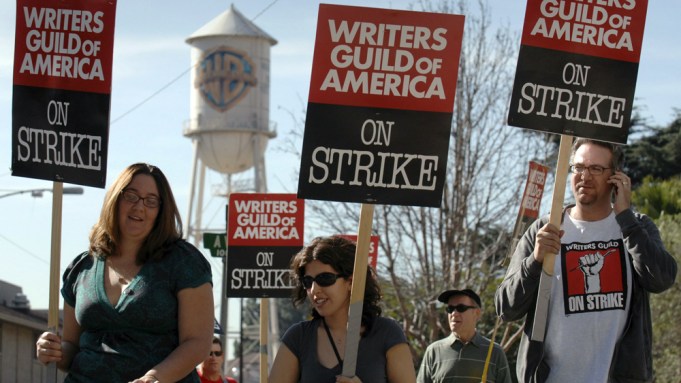 With negotiations with producers in their third week, Writers Guild of America leaders have released a video urging their 12,000 members to support a strike authorization.

No one raises their voice in the three-minute video, posted Thursday amid a media blackout in the contract talks between the WGA and the Alliance of Motion Picture and Television Producers. Instead, the leaders give a temperate take on their need for support of the upcoming vote.

“There are issues on the table that affect some of us; issues that affect all of us, but we have to collectively get behind our negotiating committee and have a strong show of support for the strike authorization vote,” said WGA West secretary-treasurer Aaron Mendelsohn. “It’s absolutely essential.”

“We’re just trying to get a little bigger piece of a very, very big pie, that’s all,” Mazzara said. “I’ve been very impressed by how our leadership is leaving their emotions at the door and really focusing on getting the best possible deal. I’ve also been surprised at how tough that deal is to get.”

The WGA struck for 100 days in 2007-08. Issues of healthcare funding and restructuring TV compensation have emerged as the major sticking points in the current negotiations.

The strike authorization vote takes place between April 19 and 24. The current three-year contract expires on May 1. The WGA said it will go on strike on May 2 if it does not have a deal — although the negotiators could agree to extend the contract if they are making progress.