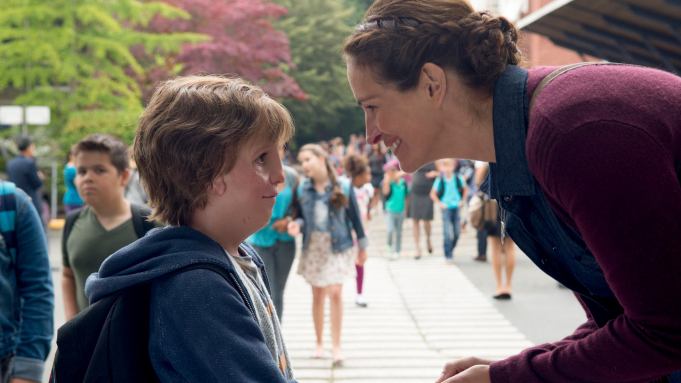 The film, based on the New York Times bestselling novel of the same name written by R.J. Palacio, shares the story of a young boy struggling to overcome facial differences.

Roberts and Wilson play the protective parents of August “Auggie” Pullman (Tremblay), a fifth grader who is starting school for the first time. By the time he’s 10, Auggie has had 27 surgeries to help him breathe, see, and hear without a hearing aid — but none have made him look like the other kids, he explains in the trailer.

As Auggie learns to navigate school, he is faced with both bullies and friends. Auggie becomes an unlikely hero as his journey teaches his family, classmates, and community about compassion, acceptance, and inner beauty — and retains a sense of humor.

“It takes a lot of work to look this good,” Auggie laughs after a classmate asks him if he’s considered reconstructive treatment.

“Wonder” also features “Hamilton’s” Daveed Diggs as an English teacher at the school, Sonia Braga as Roberts’ character’s mother, and Mandy Patinkin. The film, directed by Stephen Chbosky and written by Steve Conrad, is based on three books, “Wonder,” “Auggie & Me,” and “365 Days of Wonder.”

“Wonder” will be released Nov. 17 by Lionsgate in association with Walden Media and Participant Media.