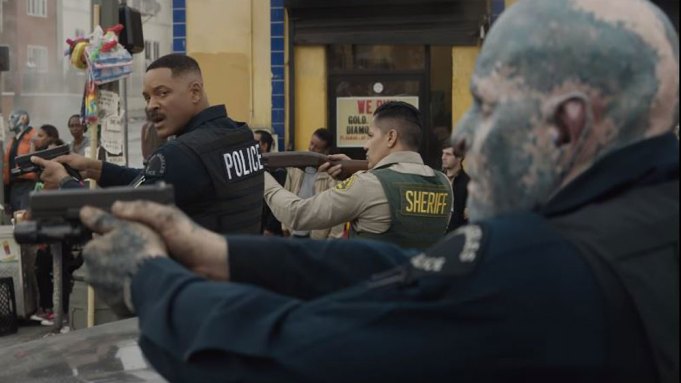 “They didn’t teach us this at the Academy,” admits Joel Edgerton to Will Smith, who play cops in a strange Los Angeles-based alternate universe in the first trailer for Netflix’s police thriller “Bright.”

“No, they did not,” Smith concurs in typical movie-cop-to-movie-cop banter.

Smith’s human cop Ward and Edgertons’ orc officer Jakoby are not pleased to be paired together — “I’m not here to be your friend,” says Smith — but manage to get along while on a routine night patrol … until they discover a deadly wand that could destroy everything. “This is like a new killer weapon that grants wishes,” Edgerton observes.

Edgerton further notes that the pair may be a prophecy, prompting Smith to joke, “We’re not in a prophecy. We’re in a stolen Toyota Corolla.”

Ayer directed from a script by Max Landis and produced with Eric Newman and Bryan Unkeless. “Bright” will be released on Netflix on Dec. 22.

The trailer for “Bright” can be viewed above.