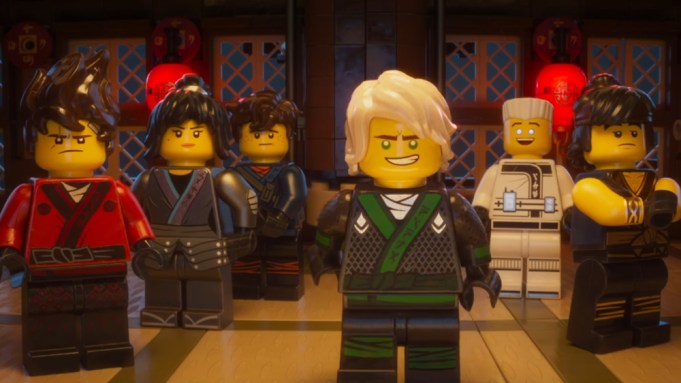 Lloyd, the central character of the upcoming “The Lego Ninjago Movie,” has daddy issues: he’s fighting so save the city from the evil Lord Garmadon, who also happens to be his dad.

Warner Bros. has released the first trailer for the film, which stars Dave Franco as Lloyd and Justin Theroux as his destructive father. The action-packed trailer features Lord Garmadon terrorizing the city of Ninjago, interrupted by the words “in a far away land threatened by darkness, defended by honor, the forces of good and evil are related.”

The movie also boasts the voice of Jackie Chan as Sensei Wu, who in his voice-over from the trailer announces that he’s forming a secret ninja force and assembles his friends, asking, “Are you ready to risk your life for Ninjago?” Everyone replies in the affirmative, followed by one voice saying “maybe.”

The animation closely resembles that in 2014’s hit “The Lego Movie” and “The Lego Batman Movie.” It’s based on Lego’s ninja-themed toys. Producers are Dan Lin, Phil Lord, Christopher Miller, and Roy Lee, who previously collaborated on “The Lego Movie,” along with Maryann Garger.

“The Lego Ninjago Movie” was originally scheduled for release last September, but was delayed for a year until Sept. 22, 2017.