‘War for the Planet of the Apes’: Caesar Seeks Revenge in Dark, New Trailer 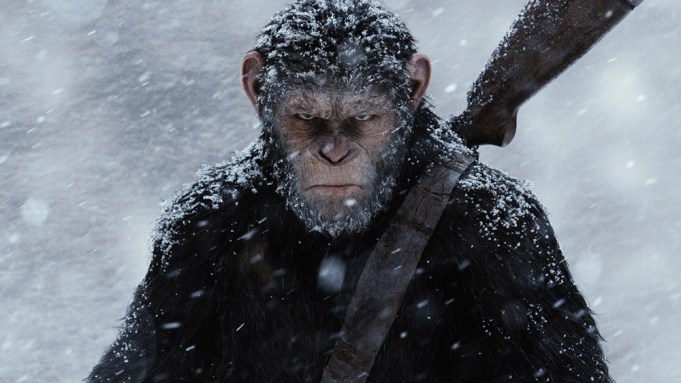 “I did not start this war — I fight only to protect apes,” Andy Serkis’ Caesar says in the official trailer for “War for the Planet of the Apes.”

The footage, released by 20th Century Fox and shown at the studio’s CinemaCon presentation on Thursday, offers a dark (both in ambiance as well as subject matter), new look at Matt Reeves’ third installment of the “Planet of the Apes” franchise.

The movie, which follows in the visually masterful footsteps of its predecessors (“Rise” and “Dawn”), seems to be less action-centric and broodier than the other “Apes” films. The shadowy trailer generates momentum for the imminent human-ape confrontation that this franchise reboot has been leading up to for more than half a decade. It suggests that, in forging that transition, this story will revolve more intimately around the burgeoning conflict between the Colonel (a head-shaven Woody Harrelson) and Caesar.

“I offered you peace,” Caesar tells the ruthless Colonel. “I showed you mercy.”

“You talk about mercy?” he responds. “No matter what you say, eventually you’d replace us. That’s the law of nature.”

The trailer for “War,” which is set two years after “Dawn,” also introduces Amiah Miller as Nova, a mute, young girl who befriends the apes. Linda Harrison played an adult version of the character in the original 1968 film.

“War for the Planet of the Apes” hits theaters on July 14.