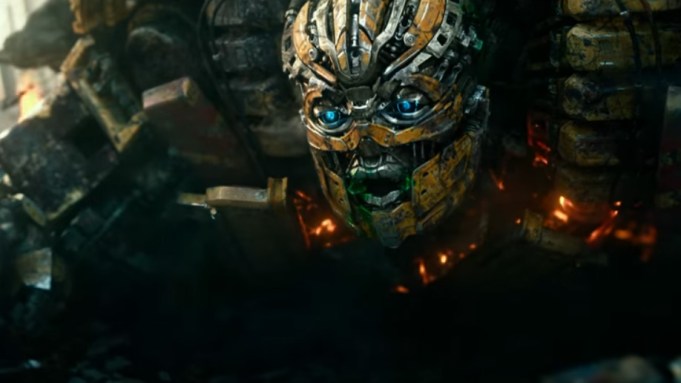 “Bayhem” is back with a bang.

Among this year’s slew of Super Bowl commercials on Sunday afternoon was a new trailer for Michael Bay’s upcoming movie, “Transformers: The Last Knight,” the fifth installment in the children’s toy-inspired franchise. And while a short Super Bowl spot was shown during the Big Game and was released online earlier this weekend, an extended look was released on Sunday.

It will be autobot v. autobot in the latest installment, and it looks like Optimus Prime will be fighting his old friends in “The Last Knight.”

“The Last Knight” will see regular heavyweights like Mark Wahlberg, Stanley Tucci, Josh Duhamel, Tyrese Gibson, and John Turturro return to the series, while adding others like “100 Things to Do Before School” actress Isabela Moner and Anthony Hopkins, who make their “Transformers” debuts.

The film ran into controversy in September while filming in the U.K., with photos emerging in a local tabloid of Blenheim Palace, the birthplace of former Prime Minister and World War II leader Winston Churchill, being used as the location for a Nazi base.

In an interview with Variety, Tony Hayes, head of the Veteran’s Association U.K., called the decision to cover the palace in Nazi insignia and have men enter its main building in Nazi uniform a “total disgrace.”

“A lot of the older generation find it totally appalling. It’s an insult,” Hayes added.