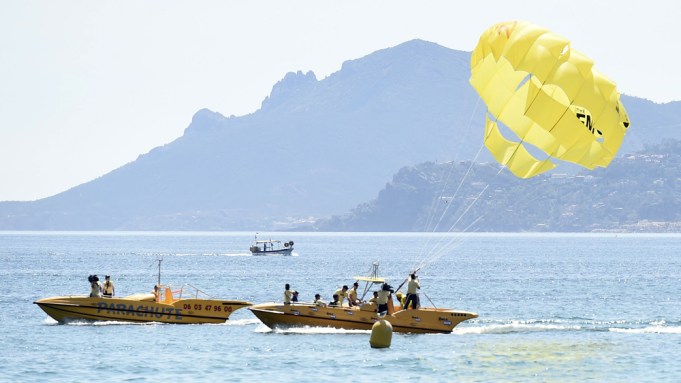 T.J. Miller parasailed into Cannes on Tuesday, in a pre-market stunt for “The Emoji Movie.”

The stunt was followed by Miller’s unveiling of the first official trailer for the film, in which he stars as Gene, the Meh emoji.

The trailer opens with Miller’s character accidentally expressing the wrong face when called on for a text message — something unprecedented in the secret emoji world. Miller and his two friends — Jailbreak, a code-breaker voiced by Anna Faris, and Hi-5, James Corden’s High Five emoji — embark on a journey through multiple apps to break into the phone that sent the wrong text before it gets wiped. Patrick Stewart co-stars as the Poop emoji.

The “Silicon Valley” star danced alongside the colorful cast of the upcoming Sony Pictures Animation movie in an event at the beach in front of the InterContinental Carlton Hotel. Miller, soaking wet after his entry from air and sea, was flanked by his wife, actress Kate Gorney, who voices the Heart Eyes character in the film.

“This is an inventive and ingenious way to depict this world, and it’s really relatable,” Miller told press. The event was streamed live via GoPros attached to Miller’s harness.

“The Emoji Movie” hits theaters on July 28. Directed by Tony Leondis and produced by Michelle Raimo, the film was scripted by Mike White and Eric Siegel. Sony also launched its “Angry Birds Movie” the day before the festival started last year.

Watch a video of the stunt here or below. The slightly awkward presentation begins at the 8:58-minute mark.